This page explains the different steps that allow the surgeon to center the ablation on the desired location with the Alcon/Wavelight EX500 excimer laser, while preventing discrepancies between registration data (Topolyzer Vario) and the EX500 laser eye-tracking system.

The EX500 excimer can be linked via local network to the Vario Topolyzer: this enables easy transfer from Topolyzer to the excimer laser. 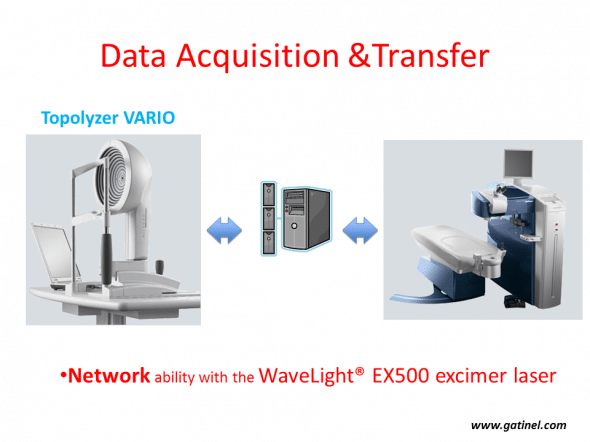 The Topolyzer captures 2-D images of the anterior segment, while the eye fixates at the center of its Placido mires. 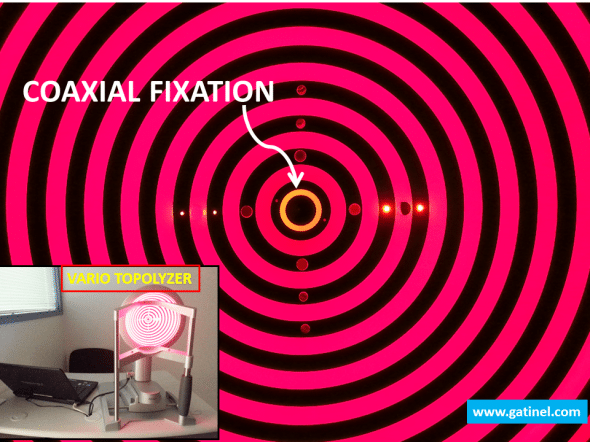 The eye fixates the center of the Placido rings, and is coaxial with the Topolyzer camera which stands along the same axis.

These images include the cornea (tear film Placido image reflexion), the pupil and iris. The pupil center and the limbus locations are also determined. The reflexion of the center of the Placido rings locates the intercept of the keratoscopic axis and the cornea, which is called “Vertex” in the ophthalmic literature. However, this point is called “Apex” in the EX500 laser software, which is a misnomer for “Vertex”, as the Apex should academically refer to the point of maximal curvature. 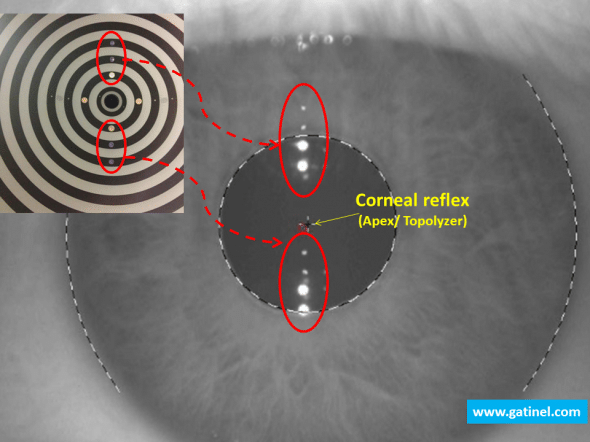 The location of the corneal reflex is performed with regards to the limbus.

For the sake of consistency, we will use  the term “Apex” to describe the corneal intercept of the keratoscopic axis (corneal reflex), from which the corneal  Placido-ring image is referenced. The recognition of the edge of the pupil is important, as the pupil margin is detected by the eye-tracker at the laser, and used as landmark to center the laser treatment.  The pupil diameter measured by default is obtained while the the Placido rings are illuminated, hence it corresponds to a « photopic » (illuminated) pupil diameter. The pupil rim can be delineated on the picture, and the projection of the center of the entrance pupil (pupil centroid) on the cornea locates the “corneal sighting center”, which is the intercept of the line of sight with the corneal surface. In addition, the image of the iris details is captured, to allow for iris recognition and cyclotorsion prevention. 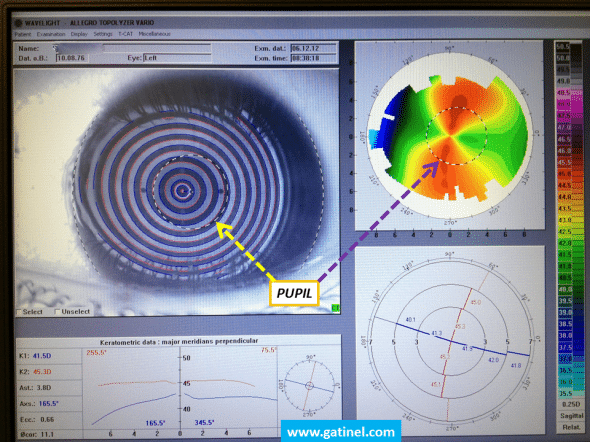 The pupil rim can be delineated and superimposed to the curvature map.

Eventually, the distance from the corneal reflex (« Apex ») to the center of the « photopic » pupil can be calculated. If the « Apex » is referenced as the center of a Cartesian domain, the X and Y coordinates of the pupil center at the time of registration can be computed. 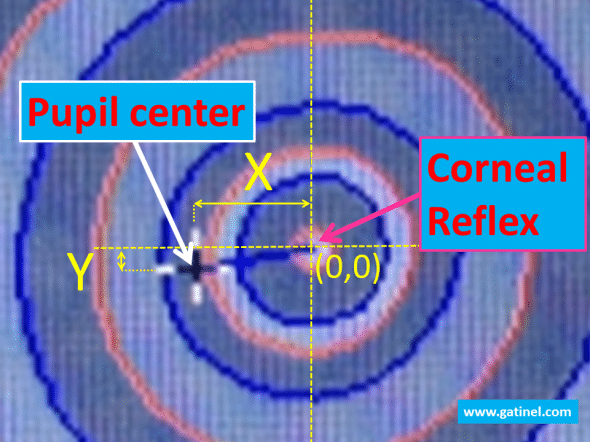 Currently, there are no clinically available methods to locate the intercept of the visual axis and the corneal surface, which may correspond to the ideal point for laser ablation centering (see this page for additional information about visual axis and other ocular axes for centering corneal refractive surgical treatments). Along the visual axis, there is minimal lateral/transverse chromatic aberration. Some studies suggest that the visual axis intercept is often located between the pupil center and the corneal reflex (= Topolyzer “Apex”), or close to it; hence, some authors advocate centering the treatment somewhere between these points.

Because of the angle kappa, the corneal reflex appears usually located on the nasal side with respect to the pupil center. While the position of the corneal reflex does not mark the intersection of the visual axis with the cornea (named “ophthalmometric pole”); however it may be its closest landmark and can be used to center the treatment (Pande M, Hillman JS. Optical zone centration in keratorefractive surgery. Entrance pupil center, visual axis, coaxially sighted corneal reflex, or geometric corneal center? Ophthalmology 1993;100(8):1230-7).

In myopic eyes, the distance of the pupil center and the corneal reflex is usually low (about 100 microns or less). However, in some eyes (with hyperopia or high astigmatism), the distance between these points can be as high as 500 to 600 microns. This reflects the existence of a large angle Kappa, defined by the angle between the pupillary axis and the visual axis). Defining the proper axis for centration may become of critical importance in eyes which exhibit a large distance between the pupil center and the « Apex » (corneal reflex). 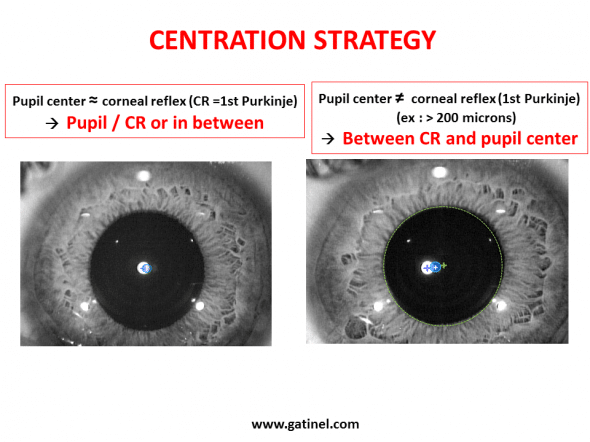 In the light of these recommendations, the EX500 excimer laser software enables to center the excimer profile of ablation on the pupil center (PC), on the corneal reflex (here called “Apex”), or in between, by 10% steps (ex: 60% of the distance along the line joining the PC and the “Apex”).

This video displays the procedure that precedes the laser delivery.

Here is a step by step description of the procedure shown in the video:

Registration and centration with the EX 500 excimer laser

This examination allows recording the corneal anterior topography and the pupil center coordinates :the location of the Apex defines the center of a Cartesian coordinates system, in which the (X/Y) pupil center coordinates are located. Several examinations can be taken and averaged. Each examination is verified by the Topolyzer software, and must exceed a quality threshold to be valid for registration and integration in the treatment program sequence (in which the desired correction, optical zone diameter, etc., are manually entered by the surgeon).

The treatment sequence (sphere and cylinder corrections) and the anterior segment image data (iris images, pupil center coordinates relative to the Apex) are transferred to the EX 500 laser system via local network. It is important to realize that the system now “knows” about the distance between the pupil center and the Apex. This distance is comparable to a “vector”.It is displayed on the screen of the programming software. 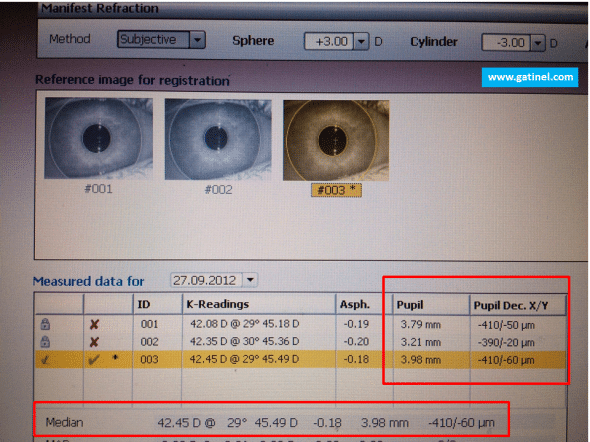 Several measurements are taken and provide information on the pupil diameter and location with respect to the apex (Pupil Dec. X/Y). A median value is computed from the various acquired examinations.
In this example, due to large angle Kappa, the pupil center at registration with the Topolyzer is located 410 micron temporally, and 60 micron inferiorly, to the apex.

However, keep in mind that the pupil center may shift with pupil diameter variations : hence, the length and direction of the aforementioned “vector” can change. Such variation can occur between the time and conditions of Topolyzer examinations to that of the excimer laser treatment, which follows flap creation or epithelial removal. This shift can be compensated for, provided that it is monitored with respect to a stable landmark. Under the EX 500 excimer laser, this landmark cannot be the corneal reflex anymore (it is not clearly visible after flap lift since the exposed corneal stromal surface is dull), but can still be the limbal ring. It is therefore mandatory to accurately locate the limbus, and iris detail for optimal image matching and comparisons.

At the time of the surgery, after flap creation and lift (LASIK surgery), or central epithelial removal (PRK surgery), three steps must be completed to perform centration to the desired location after preventing from cyclotorsion and pupil shift:

The limbus diameter measured by the laser camera (circle delineating the corneal periphery) is compared to the reference image as captured by the Topolyzer and re-normalized to its value. 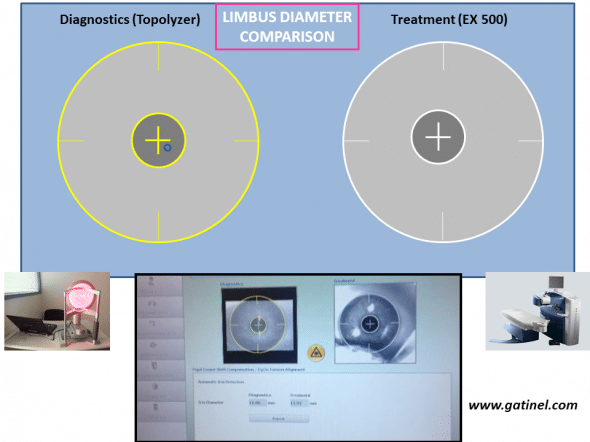 The diameter of the iris pupil is measured continuously under the laser, and the laser microscope illumination should be adjusted so that the live pupil diameter value gets as close as possible to that of the Topolyzer Vario referenced pupil image. 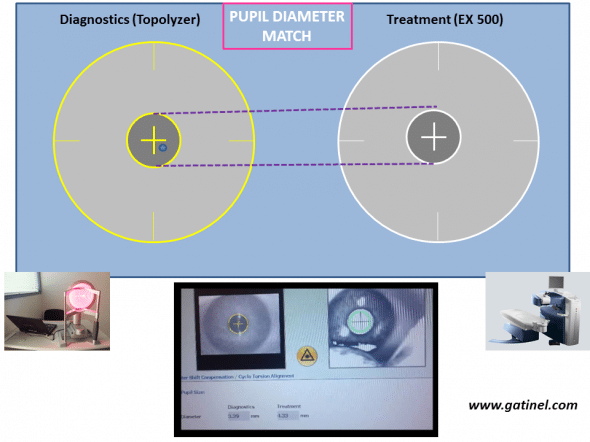 The comparison between the pupil diameter at the Topolyzer and under the EX 500 excimer laser is performed during registration. It is important to obtain comparable values. This ensure adequate pupil center location with regards to the limbus, in case of large pupil center shift when mydriasis or myosis occurs.

The difference between the location of the pupil center to the limbus as seen by the laser vs its location as recorded at the Topolyzer Vario (i.e pupil center shift) is displayed in terms of X and Y distances. In parallel, the angle of rotation of the eye (cyclotorsion) is calculated and shown in degree. If the (X,Y) distances are less than 100 microns, it is recommended to add their value to the Topolyzer measured distance between the pupil center and apex (pupil shift compensation). If the (X,Y) distances are more than 100 microns, it is recommended not to add their value to the distance between the pupil and apex. 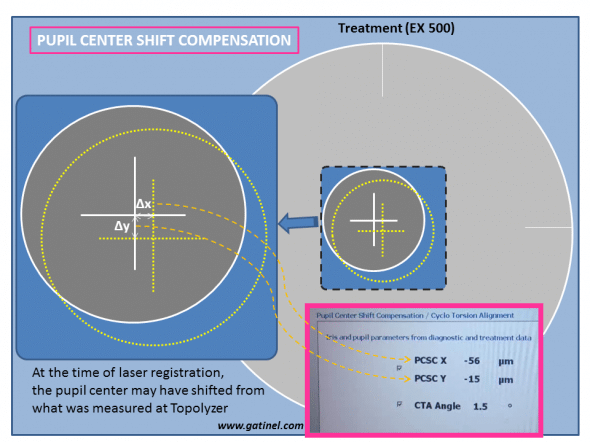 The displacement of the pupil center with regards to the limbus between the Topolyzer reference image and the actual laser image is shown in terms of X and Y distances. These distance will be used to « relocate » the pupil center and recalculate the Apex location. 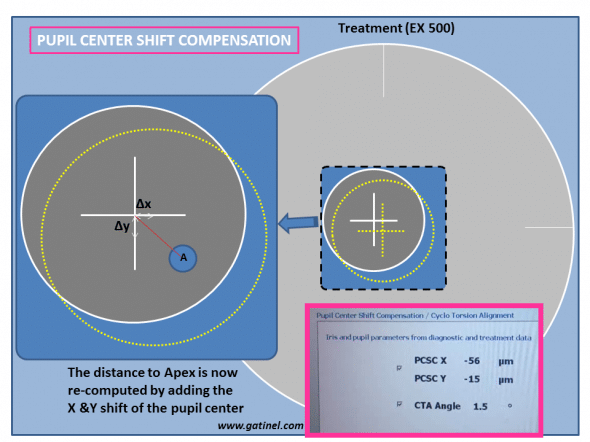 Iris details are taken into account to calculate the angle of cyclo rotation of the eye under the laser. At the time of registration, this angle is used to rotate the treatment orientation accordingly, which is of critical importance for astigmatic corrections. 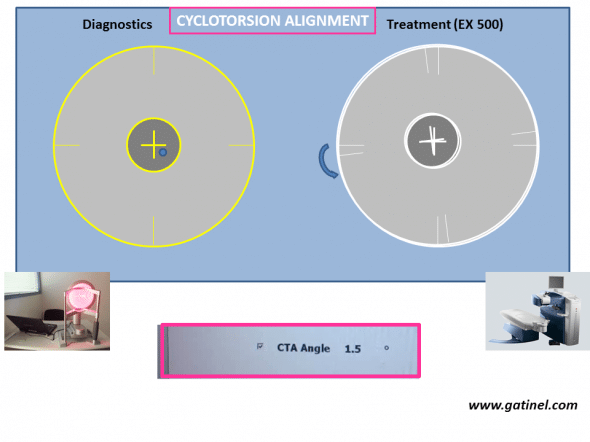 The iris image acquired by the Topolyzer is used to calculate the angle of rotation of the eye under the laser, as it may have a different orientation.

Finally, a bar selector allows the surgeon to decide where the center of the ablation will be delivered, from pupil center (0%) to the Apex (100%), or anywhere in between (ex: 60%). 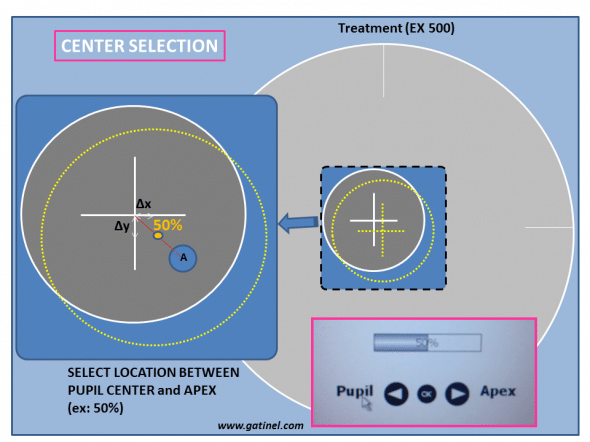 As the location of the corneal Apex relative to the pupil center is known, any point in between these two landmarks can be used to center the laser ablation.