This page is dedicated to a new intraocular lens (IOL) power formula named PEARL-DGS, which has been developed using optical and machine learning modeling.

DGS named after the formula developers: Debellemanière, Gatinel, and Saad.

Cataracts are the leading cause of curable vision loss worldwide and its prevalence is increasing with the world’s population and life expectancy (1). Surgical treatment includes the removal of the opaque crystalline lens from its capsular bag and the implantation of an intraocular lens whose power is predicted during the preoperative assessment.

In some situations, the replacement of the non-opacified (yet) crystalline lens by an IOL of selected type and power is an efficient method to alter the refractive status of the eye and reduce or preclude the need of spectacle correction. In this clear lens extraction surgery, the primary goal is to achieve the desired post-operative refraction.

The determinants of the IOL power prediction are the biometric parameters of the patient’s eye, the refractive target, and the effective lens position:

« Classic » formulas (SRK / T, Haigis, Holladay I, Hoffer Q) are based on the thin lens formula and lead to satisfactory refractive results in the majority of cases (± 0.5 D for about 75% of patients and ± 1.0 D for 90% of patients (2). They use preoperative anatomical parameters such as axial length, keratometry and/or pre-operative anterior chamber depth to predict the postoperative position of the IOL or ELP.

Their performance is, however, poorer for eyes with extreme biometric characteristics, or which have had previous refractive surgery. Many methods have been developed to accommodate these different configurations, each applicable to a specific problem (3-7).

No current IOL power calculation formula can be applied indiscriminately to all eyes, with the same precision and accuracy (8,9).

The increase of active lifestyles in seniors, where spectacle independence is valued, is reflected in the progressive increase in demand for multifocal and premium IOLs: attaining emmetropia is mandatory for such lenses. This trend reflects the increasing importance of refractive results of cataract surgery, with the precise choice of IOL power being key.

What is machine learning?

Machine learning is one of the multiple components of Artificial Intelligence (AI), which also encompasses natural language processing, machine vision, robotics, etc. The ever-growing AI community is shifting its focus onto the power of machine learning in healthcare.

Machine learning focuses on the creation of algorithms which adapt to the presentation of new data: learning is driven by the data. It differs from conventional programming where input data is specifically programmed to get an output, it uses the input and output to determine or predict a program. The program we are interested in here is an IOL power prediction formula (Figure 1). 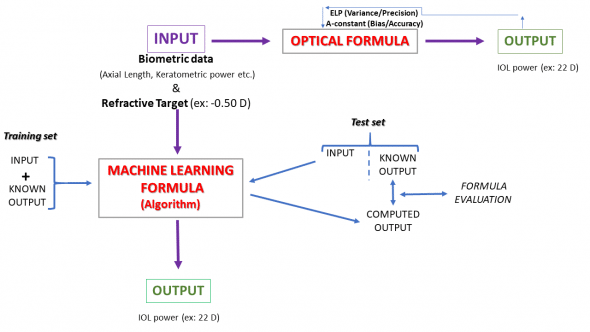 Figure 1:  Optical vs Machine Learning formula. The PEARL-DGS formula is a combination of these two approaches.

The optical formula forms the core basis of IOL power prediction formulae and can be derived from the iterative application of the vergence formula (paraxial approximation) or ray tracing. The input data (biometry and refractive target) is imported into the formula. Adjustable constants can be fine-tuned to reduce variance and bias (improving precision and accuracy). The reliability of the biometric data such as the axial length of the whole eye or its main components has improved tremendously over the years, due to the use of OCT-based techniques. The residual variability within the results of the formulae is mainly due to inaccurate ELP prediction and/or keratometric power estimation.

A machine learning formula can be obtained via supervised learning. With this approach, various algorithms are presented with example inputs and obtained outputs in the form of the ‘training dataset’.

The training data is the data that will be used by the learning algorithm; it includes typically some input data (eyes with cataract surgery and documented IOL power and refractive changes), and some output/results: the predicted IOL power to be implanted to attain a target postoperative refraction

The goal of the algorithm is to learn the general “rules” that map the input into the output. Various algorithms can be trained: the training process consists of generating predictions and making required corrections when the predictions are incorrect.

The ‘test set’ can then be used to evaluate the performance of the model. They must use unseen data at the time of the algorithm conception. Testing several algorithms is recommended, before selecting the best algorithm, which provides the highest level of accuracy and precision.

In short, the methods of machine learning, a sub-field of artificial intelligence, allow creating decision-making algorithms for classification or regression from data, without a prior implementation of decision rules.  In the context of IOL power prediction, machine learning can help to reduce part of the uncertainties that pertain to any procedure performed on biological samples with their inherent noise and variability (see Appendix for specific details related to supervised learning and IOL power formula creation).

Why develop a new IOL power formula with machine learning?

The availability of the data made accessible for analysis has increased over the last few years with the development of electronic medical records (EMR) software. In such a task, it is critical to provide the model with valid data to learn. The validity of the data affects both bias and variance, and it is mandatory to train and validate a model formula on as much robust data as possible.

In the field of IOL power calculation, these methods can learn to generalize and help with the issue of uncertainty due to the use of statistics and probability related techniques. Supervised machine learning algorithms can apply what has been learned in the past, to new data using labeled data examples to predict future events.

The domain of IOL power prediction constitutes an application to typical supervised learning problems in the form of regression: from a given sample of input data (biometric parameters), the output variable is in the form of real value (i.e. IOL power). The learning phase may improve the pertinence of the prediction of some of the postoperative variables via efficient regression algorithms. By learning from known data (the training set) the most efficient algorithm must reduce the difference between the predicted versus achieved refraction, more than previously established formulas.

The expected benefits are:

– Improving the precision of the intraocular implant calculation and reduce further calculation errors, source of dissatisfaction for the patient, and potential iatrogenic complications in case of IOL explantation or refractive enhancement.

– Simplifying the calculation procedures by developing a versatile formula, equally effective for all types of eyes.

– Advancing knowledge in the field of machine learning applied to ophthalmology.

Development of the algorithm

– Training of a machine learning algorithm adapted to the regression analysis, using the biometric parameters of the eyes and postoperative refractive result.

–  Determination of optimal hyper-parameters by cross-validation.

– A training set and a test set are selected from the prepared data: using 75% of the eyes for training, and evaluating performance on the remaining 25%, to avoid over-learning and ensure a good generalization on independent data sets.

– If the formula performs better on training datasets than on unseen test sets, the formula is likely to be overfitted

Evaluation of the formula performance

– The output of the formula is an IOL power: the ideal formula generates an accurate power to implant in a given eye to achieve the desired target refraction. The function represented by the difference between the actual power achieving the desired refraction and the predicted power must be minimized. Equally, one can aim to minimize the difference between the achieved vs predicted refraction.

– IOL power prediction formulae aim to minimize the variance (i.e distribution) of the output.  Systematic bias – for example, a formula providing a systematic 1 D error – can be easily dealt with using a simple “zeroing” method (e.g. An A constant adjusting for a specific IOL type).

The relevance of this approach has already been validated by preliminary work, having shown on a set of 400 eyes the significant superiority of a formula based on machine learning compared to several current formulas (Barrett Universal II, Hill-RBF, and classic optical formulas) in terms of absolute median error of refractive prediction. This first work, currently being reviewed, has been awarded a research grant by SAFIR / AMO Johnson and Johnson in 2018 and has been presented at the 2019 ASCRS Congress (San Diego, May 7th) – Figure 2. 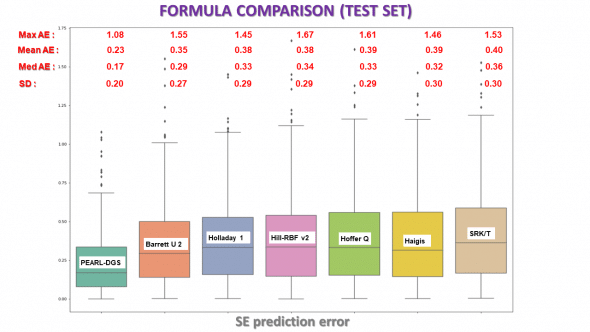 Specificities of the PEARL-DGS formula

– Based on machine learning: predicts IOL power for a given refractive target

– IOL constants are adjustable, same as for 3rd generation formulas

– No re-training is needed for new IOL models