This page is devoted to the development of a paraxial thick lens pseudophakic eye model.

Once this model is established, we can explore the links that link the different biometric constants. This is an important step towards establishing a formula for calculating a thick lens paraxial IOL power calculation formula.

Classic paraxial biometric formulas were based on a thin lens eye model: the corneal power is estimated from the curvature of its anterior face, and the intraocular lens (IOL) is also likened to a thin lens. In this type of model, the axial length is equal to the distance between the cornea and the retinal photoreceptors. The position of the IOL is defined from the cornea.

Intraocular implants (IOLs) have a non-negligible thickness on the scale of the axial length of the human eye. In addition, the distribution of the curvatures between their anterior and posterior faces can vary according to the models and the powers, which implies that, as mentioned before, at an equal distance from the cornea, two implants of the same nominal power but different designs do not provide the same correction.

To overcome this problem, it is necessary to consider the thickness of the elements involved in ocular refraction: the cornea and the lens.

The purpose of this page is to establish a relationship between the axial length of an emmetropic eye and the position of the IOL using a paraxial thick lens model.

It details the steps leading to the following relation:

Where ALT and ELPT are respectively a modified axial length and an effective position of the modified IOL within a thick lens model framework.

This expression also depends on the value of the corneal power (Dc), the power of the implant (Di), and those of the refractive indices considered (na, nv). Why is it fundamental to establish such an equation? Because it offers the possibility of being resolved for any of the variables it contains, such as the ELPT (effective position of the IOL in a thick lens eye model), or Dc, the corneal power that provides emmetropia.

The following aims to justify this equation. You can ignore the derivation of this formula, but it would be a shame because it highlights many elements relating to the properties of models in thick lenses!

Consider a thick lens eye model consisting of a cornea and an implant. The cornea + implant system focuses incident light from a source located at infinity at a focal length F’e.

Gullstrand’s formula derives from paraxial approximations and makes it possible to integrate the effect of the thickness of a diopter or a lens (or the distance separating a pair of lenses) to calculate its optical power.

Using Gullstrand’s formula, we can show that De, the optical power resulting from the cornea + IOL pair, is equal to: 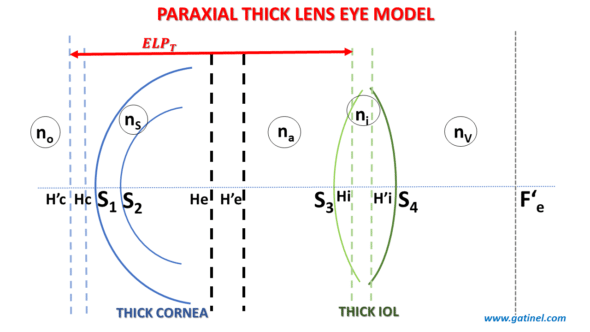 If this condition is met, then the thin lens model is equivalent (same position of the image focus of the couple cornea + IOL) to the thick lens model. The following figure is a schematic representation of this condition:

Let’s look at the thick pseudophakic eye model represented in the following figure. Some important dimensions appear, including the formula that links the ELPT to the anatomical position of the implant (S1S3 = ALP). Recall that the distances are algebraic (their sign is positive or negative depending on whether the segments’ ends are stated from left to right or from right to left under the upper line). 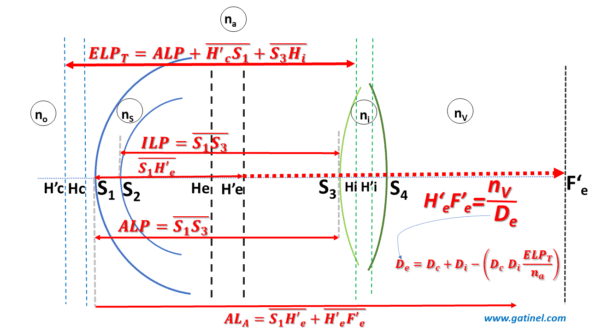 Distances of interest in a thick lens eye model

ILP is the internal lens position, from the posterior corneal vertex to the anterior IOL vertex.

One can write the relations between the ELPT and ALP as:

it is interesting to note that H’cS1 and S3Hi depend only on the cornea and the IOL to be inserted, respectively. Therefore, they can be calculated if the information is available on the corneal topography and the type of IOL.

Only the ALP cannot be known in advance with certainty but can be predicted. This is the main issue of IOL power calculation formulas.

We will now establish an expression that contains the main anatomical elements that play a role in calculating the power of the IOL. It is, therefore, necessary to establish relationships between the segments that, placed end to end, make up the anatomical axial length of an emmetropic pseudophakic eye.

The anatomical axial length (ALA) here corresponds to the value which connects the anterior corneal vertex to the photoreceptors’ plane at the fovea. Optical biometers provide the distance between the anterior corneal vertex and the retinal pigment epithelium using the technique of partial coherence interferometry.
In the case of an emmetropic eye, it is equal to the distance S1F’e, where F’e is the back focal point of the paraxial schematic pseudophakic eye.

We can split the anatomical axial length into two algebraic segments:

H’eF’e is the image focal length distance of the pseudophakic eye, which is equal to the following ratio: nv/De

H’cHi is the ELPT, and H’iH’e corresponds to the position of the principal image plane of the thick dual-lens paraxial eye model. The following expression gives it: 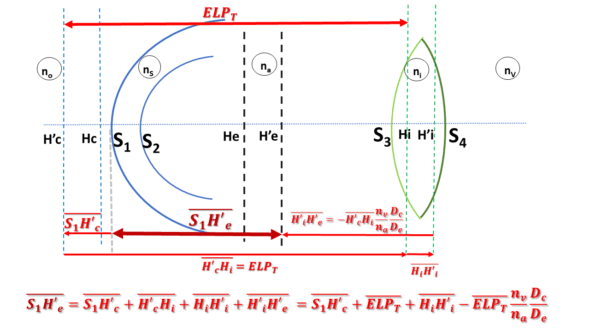 Finally, after rearranging the terms in the preceding equations, we obtain: 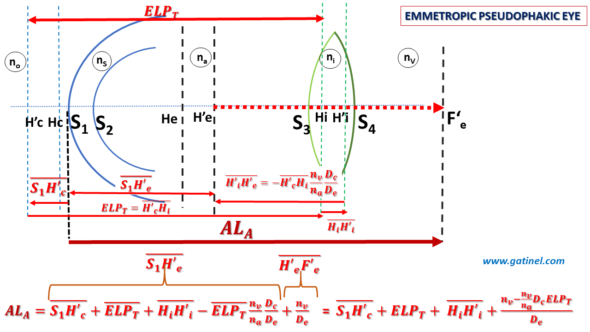 ALT is equal to the anatomical axial length of the emmetropic eye reduced by the distance between the principal planes of the implant  HiH’i and the distance between the anterior surface of the cornea and the secondary principal plane of the cornea S1H’c (which is negative). The calculation of the ALT value can be carried out from data specific to the cornea of ​​the eye to be operated on and from the characteristics of the intraocular lens, which will have to be placed to replace the lens. 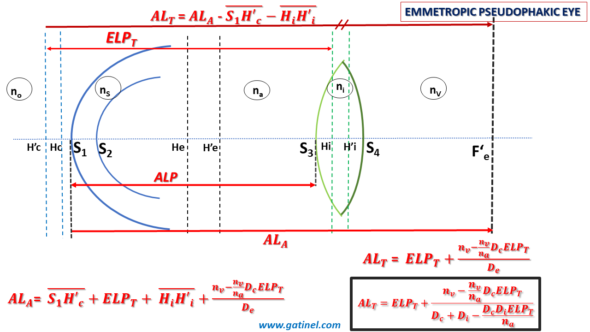 We finally obtain the expression for an emmetropic pseudophakic eye:

This equation is valuable:

It provides the value of the axial length of an emmetropic eye provided with a cornea and an IOL considered as thick lenses.

One can resolve it for any of the variables it contains. This makes it possible to determine the value of certain variables in the circumstances such as:

Determining the total corneal power (Dc) plays an important role in calculating the theoretical refraction (SE: spherical equivalent). Once this value is obtained, the refraction in the corneal plane is obtained by subtracting this value from real power measured using keratometry.

-last but not least, if we solve this equation for the power of the implant Di, we naturally obtain a biometric formula for calculating the power of IOL in a thick lens, paraxial eye model.