Their widespread use should not overshadow some particularly impressive features of this technology.

Here is a short summary of mind-blowing numbers and analogies.

-What does the prefix “femto” mean?

– How short in time are the Femto-laser pulses?

In order to better understand the scale of the femtosecond, we can expand the duration of one second until it becomes equal to the estimated age of the Universe (about 14 billion years). At this scale, the duration of a femtosecond stretches to just under 8 minutes only.

The total duration of light pulses emitted by femtosecond lasers used in corneal surgery is equal to a few hundred femtoseconds.

If the second is stretched to equal a year, the duration of a Femto-laser shot of 400 fs stretches to about 0.000012 seconds (10 millionths of a second).

Stretching the second to the estimated age of the universe, a laser shot emitted for 400 femtoseconds now corresponds to a duration of 2 days, quite a brief period on this scale. 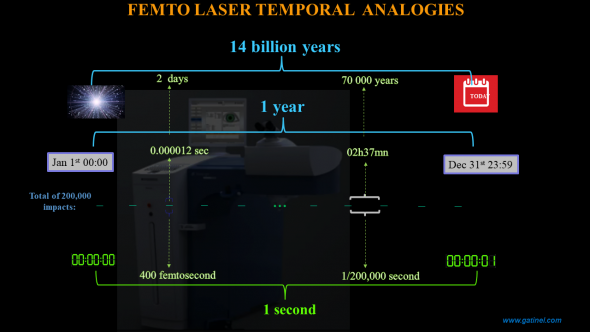 -How short in time are the Femto-laser pulses?

To represent the swiftness of the femtosecond shots, let us consider the distance traveled by the light emitted for a duration of 400 femtoseconds.

The velocity of light propagation in a vacuum is 299 792 458 m/s. Hence, it takes just a second for a beam of light to cover the distance between the earth and the moon, (384,400 km), or to circle the earth seven and a half times.

Hence, during 400 femtoseconds, the leading edge of the laser light pulse has time to cover only 0.12 millimeters (120 microns)! This is about the thickness of a human hair. 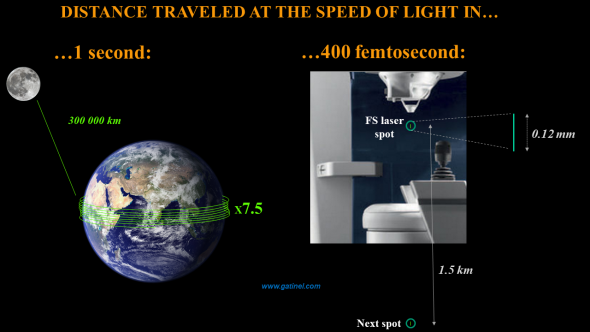 -What is the Femto-laser firing frequency?

The firing frequency corresponds to the number of shots per unit of time.

The Alcon Wavelight FS200 is the fastest femtosecond laser widely used in clinical practice. Its frequency is equal to 200 kHz.  Simply put, in one second, this laser emits 200,000 spots.

If they encountered no obstacle with which to interact, the distance between the successive 100 microns long waves would be approximately 1.5 km (this corresponds to the distance traveled by light in 1/200 000th of a second).

If the duration of one second is stretched again to equal a year, then the time interval between each spot stretches to about 2.5 hours.

At the scale of the estimated age of the Universe (14 billion years), the 200 kHz femtosecond laser would become an instrument that emits continuous radiation for two consecutive days, with a 70,000-year gap between consecutive shots.

What is typical spot energy?

The energy of an impact is of the order of a microjoule (10^-6 joule), one-millionth of a Joule.

Power corresponds to the amount of energy supplied to a system per unit of time. The extraordinary swiftness of the interaction of the light pulses emitted by the femtosecond laser with the corneal tissue provides the laser light pulses with sufficient power to break the corneal tissue at the focal point by separating the electrons from their atomic nuclei.

Each impact creates a cavitation bubble with a diameter of just a few microns.

How many spots are required to create the LASIK flap interface?

To create the LASIK flap interface, the 400 femtosecond long laser shots are focused at a controlled depth from the surface of the cornea and distributed so that they form a juxtaposition of dotted lines, with a typical spot and line spacing of 8 microns.

A typical 9 mm flap covers a surface of about 64 mm2. This is equivalent to the surface of a square of an 8 mm side. Hence, with a spacing of 8 microns, 1000*1000 = 1 million spots are required to complete the interface creation.

If these spots were all drawn along a single line, they would cover a total distance of approximately 8 m. This, 8 microns spaced dotted line would be at a speed of 5.7 km/h in about 5 seconds.

It is worth noting that dividing the spot spacing by 2 (4 microns) would result in 2^2 = a 4 fold increase in the number of spots for the same flap diameter. For the same firing frequency (200 kHz), this would increase the total time for interface creation from 5 to 20 seconds. 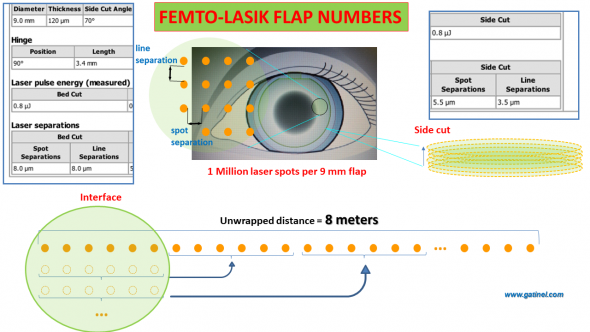 How many spots are required to create the side cut?

The spot and line spacings are usually different and coarser for the side cut than for the interface creation. The number of spots required to delineate the side cut depends on the selected flap thickness and diameter. For a 9 mm flap of 100 microns thickness, a spot separation of 5.5 microns, approximately 5000 spots are delivered to create the circular patterns for the flap’s outer perimeter.

With a line spacing of 3.5 microns, a stack of about 30 circular patterns is necessary to complete the side cut of a 100-micron thick flap.

Hence, the total number of spots is approximately 150 000, which would take just under one second to deliver at 200 kHz firing frequency.

In summary, a typical Femto-LASIK flap cut with a 200 kHz laser system requires 1 Joule of energy to be delivered for less than 10 seconds  (1000 000 spots of a millionth Joule) with a total length of 8 meters.