However, as we will see in this example of a keratoconic eye, the Zernike basis can induce some artifacts in the wavefront interpretation, which can be avoided with the novel LD/HD basis and decomposition method.

In particular, the use of Zernike polynomials to decompose a wavefront in such an aberrated eye:

A case of unilateral KC

This keratoconus (KC) was diagnosed using systematic corneal topography, performed in a 24 yo refractive surgery candidate, revealing unilateral keratoconus in the right eye. The left eye topography showed only mild irregularity on the curvature map (Left eye axial topography map: lower inset). The vergence map shows an asymmetric distribution of the refraction power throughout the pupil area: the marked corneal inferior steepening results in an increase in the vergence inferiorly. The best spectacle correction (objective refraction) predicted by the OPD-scan III is  -3 D. 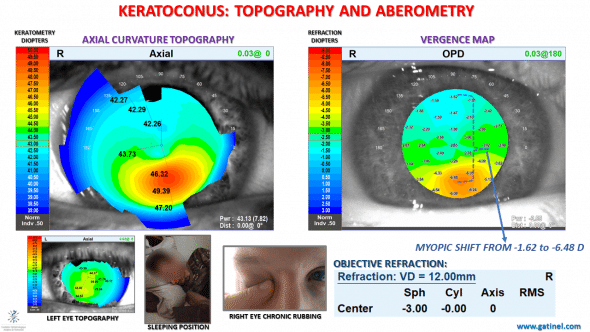 Axial curvature topography and vergence map of the right eye of a patient with unilateral keratoconus (OPD-scan III).

The complete description of this case is available here. The unilateral character of the keratoconus was explained by vigorous and excessive ipsilateral right eye rubbing (–>no rub no cone conjecture), the cause of which was attributed to an unhealthy sleeping position (read more about the link between sleeping position and KC). The cessation of eye rubbing has resulted in the absence of progression of the keratoconus since.
Mild visual disturbances, characterized by vertical monocular diplopia (right eye) have been noticed by the patient, despite the spectacle correction of his myopia.

We will focus here on the analysis of the wavefront of this right eye.

The total ocular wavefront data was acquired with the OPDscan III on a 6.5 mm pupil.

A new beta software enables comparison of the Zernike coefficients with the coefficients of the modes of a novel wavefront decomposition method called LD/HD (Low degree/High degree). In both aberration modes series, 28 polynomials (up to the 6th order) are used (Zernike vs Gatinel Malet polynomials): 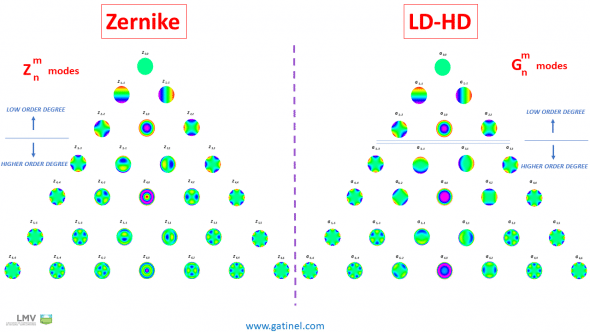 Comparison between the Zernike vs LD/HD basis. The low degree modes are identical. The modes of higher degree located in the 3 central columns are different. While the Zernike modes exhibit central ripples, the Gatinel Malet modes of the LD / HD classification are « flat » in the paraxial region. Rapid phase shifts at the center of some Zernike modes are caused by the clinically unwanted presence of low-order terms.

The first 6 polynomial modes have the exact same mathematical expression in both classifications and belong to the low order aberration component: the shape of these modes incurs rapid phase variation centrally, having a large impact on the sphero-cylindrical refraction.

22 polynomials are used to decompose the higher order wavefront component. Because of their higher radial degree value, the shape of these modes is relatively flat in the center; therefore, their impact on the refractive error of the considered eye is not as pronounced as that of the 2nd order modes: however, some higher order Zernike modes exhibit some rapid phase changes in their central portion.

The visual impact of these higher order aberration refers to “optical quality”; reduction of the contrast sensitivity, and perception of visual disturbances such as monocular diplopia, halos, etc.

There are differences in the analytical expression of some of these higher order polynomial modes: in the Zernike classification, some aberration modes, such as coma spherical aberration, secondary (or high order) astigmatism contain some low order terms.

Hence, the low order and AND the higher order wavefront components of the same ocular wavefront obtained through the Zernike and the LD/HD are different.

The coefficients values are listed side by side, in histograms of the same scale, for a 6.50 mm pupil of the right eye with keratoconus. This plot allows one to have a quick glimpse at the main differences between these wavefront decompositions: 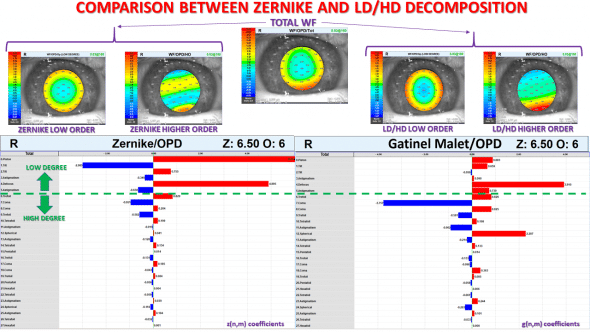 Representation of the split between the Zernike vs LD/HD decompositions and corresponding wavefront coefficients.

As expected, the presence of a corneal deformation causes both an increase in low (myopic astigmatism) and high order modes (coma, trefoil, secondary astigmatism, etc. ).

Let us now focus on some specific groups of aberrations:

A histogram limited to the Higher-Order (HO) wavefront components (NB: the scales are different) is presented here for a 6.50 mm pupil: 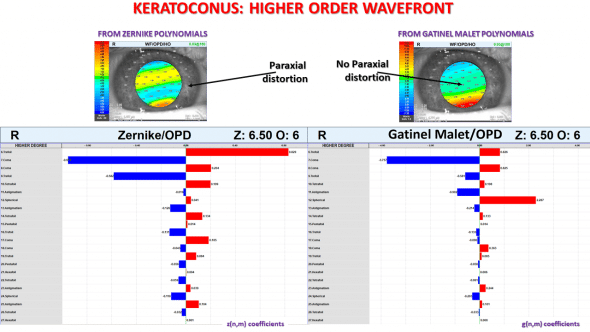 List of the higher order wavefront coefficients: comparison between the Zernike and LD/HD decompositions.

The visual inspection of the Zernike HO wavefront shape shows the presence of a vertical gradient of wavefront error. In the LD/HD decomposition; the HO wavefront error is mostly caused by vertical coma and positive spherical aberration. As expected, LD/HD HO component is paraxially flat.

In the Zernike decomposition, trefoil is the most contributory aberration (coefficients line 6 and 9) to the HO wavefront error. The spherical aberration coefficient’s value is negligible.

Conversely, coma and spherical aberrations are the most contributory aberrations in the HD component of the LD/HD decomposition.

The low order components obtained with each method of decomposition are compared: 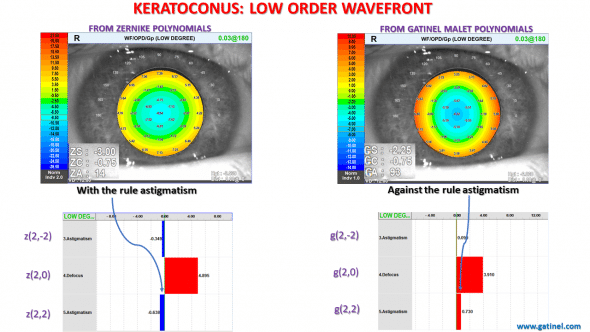 Comparison of the low order wavefront components and coefficients between the Zernike and LD/HD decompositions.

In the Zernike decomposition, the negative sign of the z(2,2) coefficient suggests the presence of with the rule astigmatism.

In the LD/HD decomposition, the positive sign of the g(2,2) coefficient suggests the presence of against the rule astigmatism.

The refraction predicted from the Gatinel Malet coefficients is closer to the subjective refraction of the analyzed eye.

The analysis of astigmatism is particularly difficult in some eyes with elevated higher order aberration such as coma. It is interesting to note that the prediction of the spectacle correctable astigmatism seems more accurate with the LD/HD method.

The 3rd order coma modes are compared in the Zernike and LD/HD decompositions: 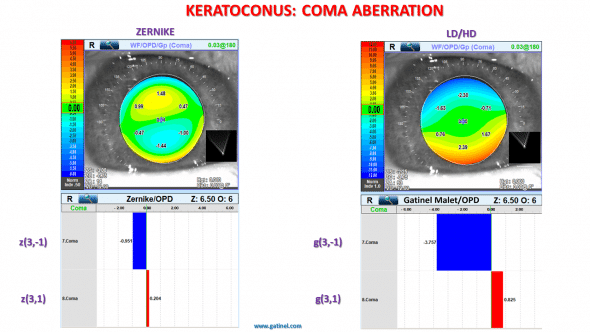 The Zernike coma mode, on the left, has a peculiar tilted shape paraxially. This reflects the consequence of the analytical expression of Zernike coma mode which contains a tilt term. This contamination of a higher order mode (coma) by some lower order wavefront error (tilt) is not based on a clinical need. Rather, the subtraction of a tilt term is necessary to make the coma mode orthogonal to the tilt mode.

Interestingly, the Zernike trefoil mode is pure and not contaminated by a tilt term, because it is “naturally” orthogonal to the tilt mode!

Explaining the tilt and coma discrepancy

The presence of tilt in the Zernike coma mode is undesirable clinically: when the wavefront propagates outside the eye, it is paraxially flat. 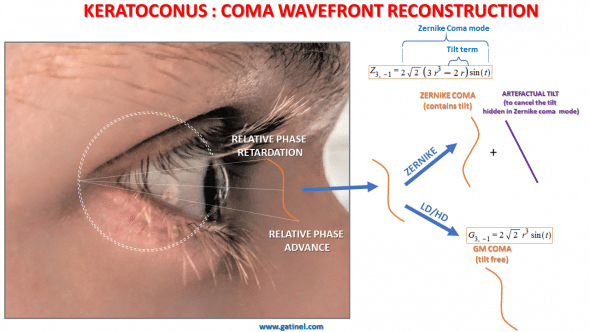 The tilt hidden in the coma mode causes an inadequate orientation of this mode, relative to that of the coma-aberrated wavefront leaving the eye with keratoconus.

Since it is devoid of tilt, the Gatinel Malet (GM) coma mode is paraxially flat (non tilted), and can confidently model the natural coma wavefront error. 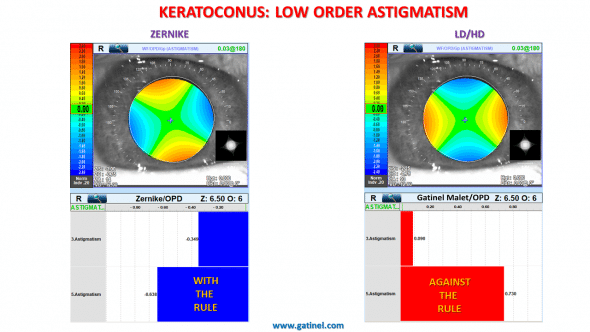 There is a marked discrepancy between the Zernike and LD/HD low order astigmatism orientation. 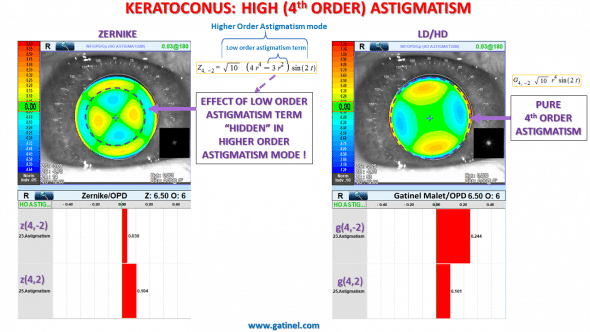 Comparison of the shapes of the 4th order astigmatism modes contribution to the higher order wavefront component in the Zernike vs LD/HD decompositions.

The comparison of the shapes of the wavefront error due to the combined higher order astigmatism modes is eloquent. The central portion of the Zernike high order astigmatism is distorted by the presence of the low order astigmatism term. This tormented center zone which suggests that such an error on its own would generate, in itself, large amounts of refractive astigmatism (low order – correctable with spectacle). 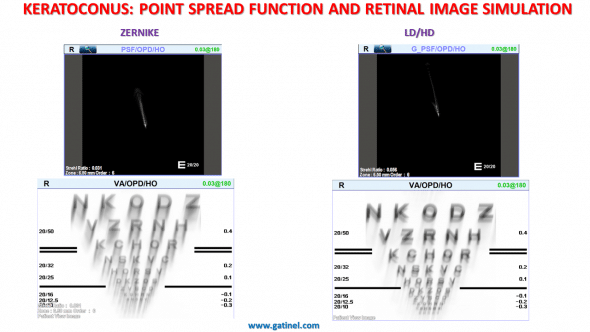 Comparison between the Point Spread Function (PSF) and the simulation of the retinal image of an EDTRS chart.

The simulation of the retinal image of “E” letters for various resolutions was shown to the patient, along with the corresponding “E” letters. 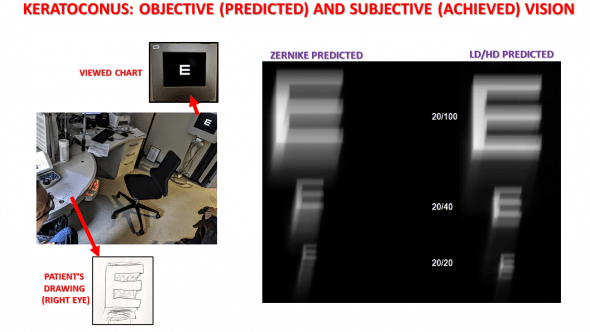 The patient was asked to draw his visual perception of a white E letter on a dark background for various resolutions. The retinal image of these « E » letters was then predicted using the higher order component of the Zernike vs the LD/HD wavefronts. The drawing of one “E” letter (20/40 visual acuity) as perceived by the patient is shown here.

For each resolution, the appropriately refracted patient judged that the LD/HD higher order component predicted resembled his subjective visual perception much more closely.

In conclusion, this case highlights the inherent weakness of some aberration modes in the Zernike classification.

Just as spherical aberration contains some defocus, coma contains some tilt, and secondary astigmatism contains some lower astigmatism. This can reduce the correspondence between the subjective refraction, visual perception and the equivalent metrics predicted from wavefront analysis. These findings could also have negative consequences on the relevance and effectiveness of custom corrections.

In eyes suffering from conditions which compromise their optical quality beyond the presence of a sphero-cylindrical refractive error, such as keratoconic eyes, wavefront analysis remains a precious investigative tool.  The LD/HD method shows promising results to better understand the refractive status and visual disturbance experienced by our patients.

I express my gratitude to Radhika Rampat, MD, and Adrien Mazharian, MD,  who contributed to this page.