This case is my oldest documented report of corneal ectasia. LASIK was performed in 1999 in a 30 yo man, and the preoperative topography screening was obtained using the slit scanning based ORBSCAN I instrument (the first version of the device did not have a Placido disk). Preoperatively, the cornea of the right eye (RE) exhibited low keratometry values and with the rule astigmatism. The cornea of the left eye (LE) showed some central irregularity, with an overall pattern of oblique astigmatism. 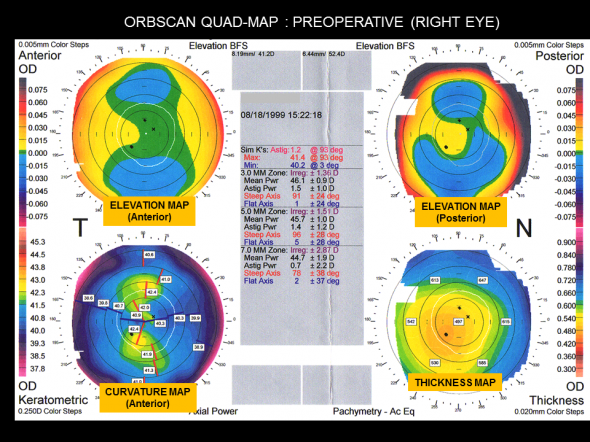 Preoperative ORBSCAN quadmaps (Right Eye). The cornea is thin (less than 497 microns) and the thinnest point (black circular dot on the thickness map) is decentered inferiorly. This feature is in itself a warning sigh for the presence of a forme fruste keratoconus. In 1999, this was not well-known, as the ORBSCAN instrument had just been made available for clinicians. 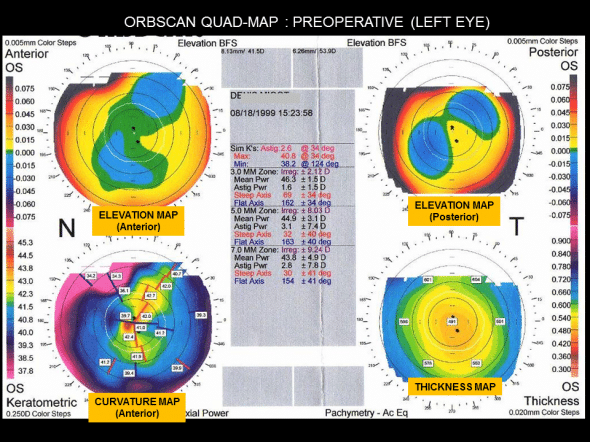 Preoperative ORBSCAN quadmaps (Left Eye). The cornea is thin (less than 491 microns). The cornea shows toricity with an « oblique astigmatism ». The curvature map shows irregularity (the curvature map is calculated from the elevation data). There is poor inter ocular symmetry (enantiomorphism).

The right and left corneas were thin (490 microns bilaterally). LASIK was performed with a mechanical microkeratome and 87 microns of central ablation in the LE and 75 microns in the RE. 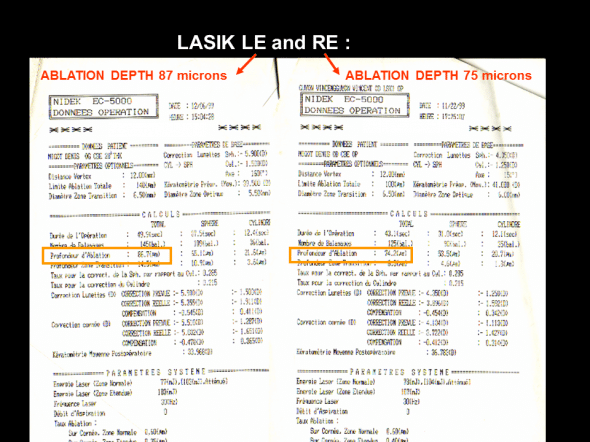 This document is the laser ticket obtained from the EC5000 (NIdek) excimer laser. It shows the values of the maximum laser depth of photoablation.

Ectasia occurred approximately 4 years postoperatively in the right eye. The left eye topography exhibited some central irregularities, evocative of the possibility of an early ectatic process. 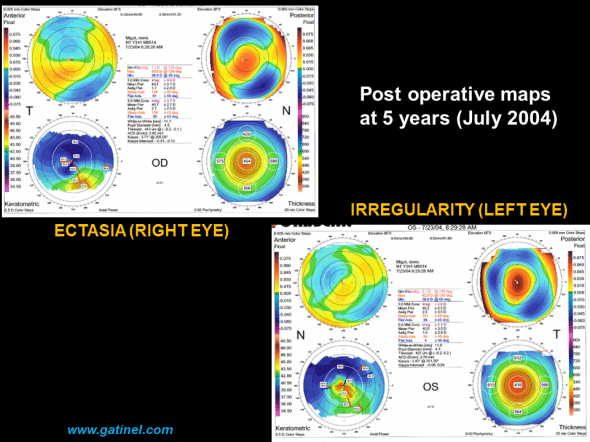 Postoperative ORBSCAN maps (obtained 5 years after the initial surgery). Ectasia has occurred in the right eye. The left eye topography is abnormal and suggests the possibility of the beginning of an ectatic process.

The retrospective analysis of this case reveals that many warning signs were present at the preoperative stage of the evaluation: the corneas were thin, the thinnest point of the right cornea was decentered inferiorly; there was poor Right and Left eye symmetry.

The first report of ectasia was published in 1998 by Theo Seiler, and most LASIK surgeons were not aware of this complication in the late 90s.