3. Computing vergence in the pseudophakic eye

This page is intended to familiarize the reader with the notion of vergence and its propagation within the ocular media of a pseudophakic eye. We will show interactively how one can, from the simplified characteristics of optical interfaces (radius of curvature, refractive index, and separation distances), answer this question:  where does the image of a source point focus after passing through the cornea and IOL? 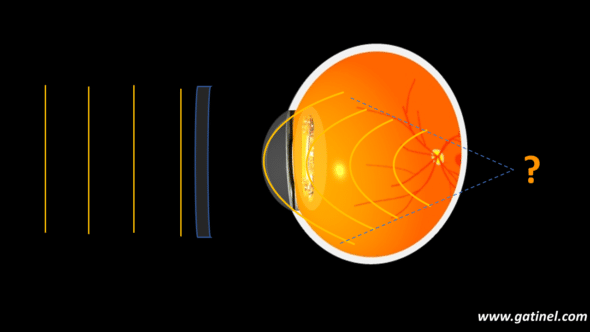 A little reminder on vergence

As we have seen before, vergence is a useful parameter in paraxial optics: it is proportional to the inverse length and is expressed in diopters (D or δ).

We only interested in part of the light emitted, in the form of wave trains, rays, and wavefronts, but our calculations will focus on vergence.

Vergence corresponds to the ratio between the medium’s refractive index and the distance from (negative value) or towards (positive value) the focus.

Let n be the refractive index of the medium considered, and f the distance to the focus: 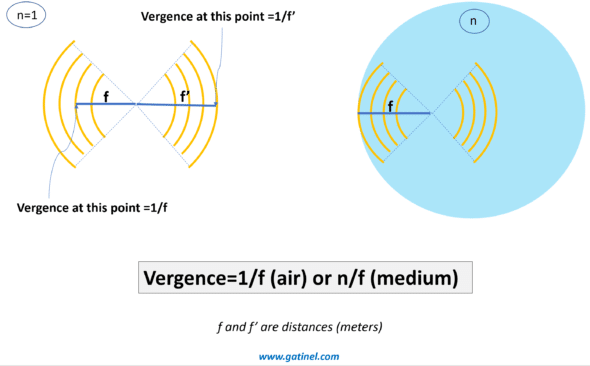 In the case of an optical system immersed in air or vacuum, the vergence can be defined simply as the inverse of the image focal length.

The interest of the concept of vergence lies in the fact that this notion implicitly « contains » the information on the distance from the focus from which the light comes or towards which it converges.

The vergence formula makes it possible to calculate the distance to image focus I after a diopter of radius R and refractive index n’ has refracted the light emitted by a source located at distance O in a medium of refractive index n:

n / O is the vergence of (from) the object Vo

(n’ – n) / R is referred to as the paraxial optical power P of the diopter.

We can thus write the vergence formula as:

When we have determined Vi, we know the distance which separates the top of the dioptre from the focus: it is equal to n ‘/ Vi.

Light propagation to and in the eye

Consider a point source that emits light in all directions. We only represent a part of the light emitted here, in the form of wave trains, rays, and wavefronts, even if our calculations will involve vergence. The diagrams are not drawn to scale, of course. 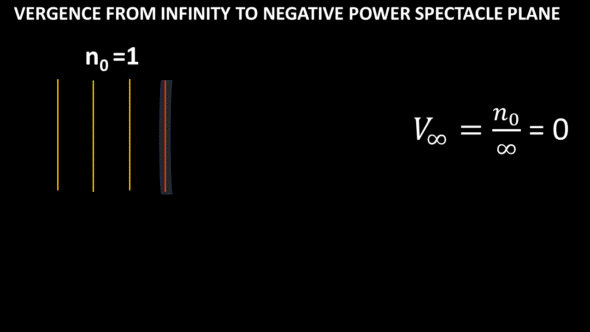 Rays (not shown) are parallel far away from the source: hence, the portion of the wavefront that will be incident on the spectacle glass is flat (i.e., null vergence).

This spectacle glass can modify the path of the light rays. The question asked is: what becomes of the vergence after the passage through the glass?

To answer this question, it suffices to use the additive properties of vergence. The vergence of a distant source (to infinity) is zero when reaching the spectacle lens. After passing through the glass, the vergence is that of a portion of a spherical wavefront (circular in section) of radius fs. In the absence of any other optical element in the path, this wavefront collapses on its center located at the distance fs. The vergence after the spectacle glass, Vs., is equal to the ratio between the index of the propagation medium (here air, n0=1) and the distance to the focus fs. In this illustrated example, the vergence of the spectacle lens is positive: a beam of parallel incident rays converges a focus after the lens. In the case of a glass of negative vergence, this beam would diverge, but the calculation would be the same, except for the sign. 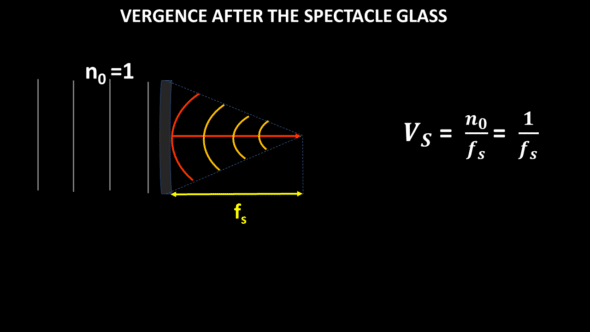 In general, a spectacle lens is placed in front of a phakic or pseudophakic eye, for which it is intended to correct ametropia.  The spectacle lens serves to modify the incident vergence of light so that the image from a distant source is perceived as sharp by that eye, which assumes that this image is formed at the retinal plane. In such a scenario, the vergence of a wavefront which leaves the posterior face of the crystalline lens (or of the IOL if the eye is pseudophakic) is necessarily equal to the ratio between the refractive index of the vitreous and the distance separating the posterior surface of the crystalline lens from the fovea.

To compute the wavefront’s vergence leaving the crystalline lens (or IOL in the case of a pseudophakic eye), we must calculate the cumulative effects on the incident vergence of the eye of the cornea, the lens, and the distance between them and the retina. The method to be applied is always the same: we calculate the vergence at the entry then at the exit of a refractive element. 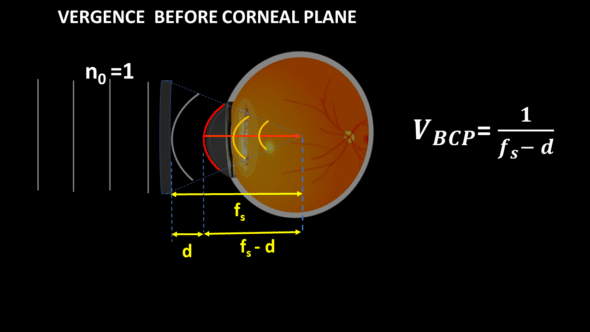 Vergence of the wavefront reaching the cornea

The cornea is considered here as a thin lens. Its vergence (VK expressed in diopter, for example, 43 D) adds up to VBCP, and at the exit of the cornea, the vergence after corneal plane (VACP) is easy to calculate. After the corneal plane, the distance at which the wavefront would focus in the absence of interposed elements is equal to the ratio between the refractive index of the aqueous humor (na) and the VACP. 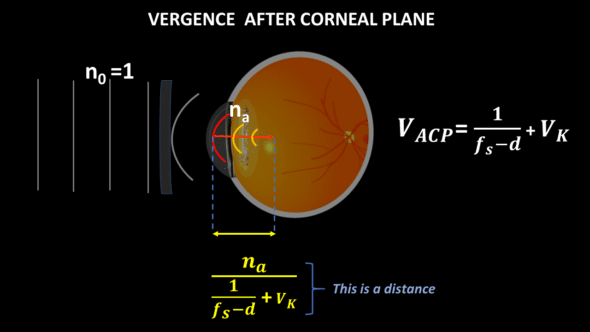 It is important to familiarize yourself with this gymnastics of calculation used to produce an IOL power calculation formula known as a « thin lens IOL power formula »: it relies on computations using the cornea’s vergence the IOL considered infinitely thin lenses.

To gain precision in IOL power calculation, it may be interesting to consider the cornea and the artificial lens implant as « thick lenses. » We must then apply the same method as above, but detailing the effect of each of the surfaces of the cornea and the intraocular implant. This procedure will make us even more familiar with the vergence formula. It is detailed in the next paragraphs, which contain an interactive calculation form.

Each computational step is shown here (not to scale).

We start with a point source located at a finite distance from the cornea: its vergence is negative and equal to the inverse distance. After refraction by the four surfaces of the model eye (front face then back of the cornea, front face then back of the artificial lens implant), the vergence is modified. Its final value makes it possible to calculate the distance to the image focus from the back surface of the implant. If this distance is equal to that which separates the retina from the rear surface of the implant, the retina is said to be conjugated with the source point and will form a clear image of it. 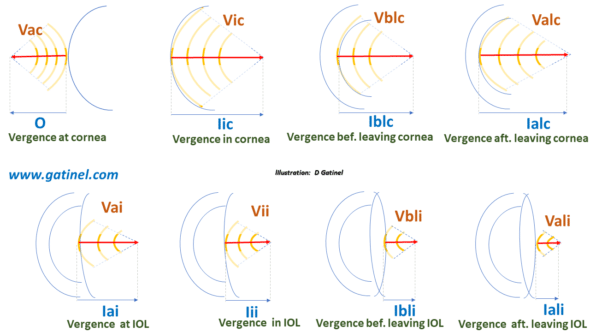 Computational steps for vergence propagation through the pseudophakic eye.

In this spreadsheet, the vergences represented in the previous figure are calculated, and the distances that separate each incident or emergent wavefront from the next focus. (scroll down for results):

From the thick lens model of the pseudophakic eye, we could estimate, using the vergence formula, the distance between the anterior surface of the cornea and the final focus (referred to as Image Focal Plane in the spreadsheet) for an object located at a distance conjugated with the retina after refraction by the spectacle lens and ocular refractive components.  If this distance is equal to its axial length, the pseudophakic eye is well corrected for the distance O.

We can vary the numerical values of parameters such as refractive indices, curvatures, and the distance between the refractive surfaces to appreciate the impact on the focusing distance.

The Coddington factor relates to the design of the IOL and is calculated from the values of the front and back radii of curvature of the IOL. A value of zero indicates that the IOL is symmetrical.

We are now sufficiently familiar with the vergence formula. It is time to discuss its use for calculating the power of the IOL aimed at providing the desired postoperative refraction. Next, we will use the vergence formula to establish a biometric power calculation formula from a thin lens pseudophakic eye model.