Warning: set_time_limit() has been disabled for security reasons in /home/clients/0e98f30bad73cbe357ff222deca9aba0/web/gatinel/wp-content/plugins/security-malware-firewall/lib/CleantalkSP/SpbctWP/Scanner/ScannerQueue.php on line 74
 11. Back calculation of Effective Lens Position (ELP) - Docteur Damien Gatinel

The position of the IOL in the pseudophakic eye influences the refractive outcome of cataract surgery, and the different methods used for predicting the « Effective Lens Position » (ELP) are the main milestones in the evolution of biometric IOL power calculation formulas. The rise of artificial intelligence techniques offers an additional opportunity to improve the quality of this prediction. This page is dedicated to the back-calculation of the position of the IOL considered as a thick lens, which is an essential part of developing an IOL power calculation formula that uses an optical model of a pseudophakic eye. At the end of this, an interactive spreadsheet allows simulations for this ELP back-calculation.

When a paraxial or ray-tracing-based formula provides intraocular lens power after the surgeon’s request, it assumes that the IOL will occupy a precise position in the anterior segment of the eye. Once this position is predicted, there is, in principle, only one IOL power possible to achieve the desired target refraction (at least with a thin lens paraxial eye model). 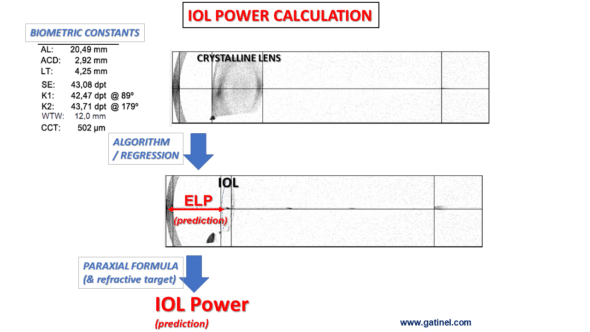 This assumption regarding the IOL position is based on a predictive model that results from learning which one carried out thanks to retrospective data, such as postoperative refractions measured on many pseudophakic eyes whose preoperative biometric characteristics type and optical power of the inserted IOL are known. Whatever technique is used (multiple regression, AI algorithms), it is necessary to have a volume of well-documented data that is sufficient (sample size) and high quality.

Ideally, for every eye in the training set, we need preoperative data, the type and power of the implant placed, the refraction achieved after the cataract intervention, and a method to determine the physical position occupied the IOL in the anterior segment. The most direct method would obviously consist of measuring the implant postoperatively’s anatomical position (this position would be given by the depth of the anterior chamber of the pseudophakic eye, which can be measured by a recent biometer instrument or an OCT imaging device). This kind of data is unfortunately not documented routinely after cataract surgery.

It is, however, possible to back-calculate an estimated IOL position from the postoperative refraction, preoperative biometric data, and the power of the inserted implant. We understand intuitively that this computational approach provides information on a « functional » (or « optical ») position, and we will see that this is of particular importance to distinguish between a thin lens vs. a thick pseudophakic eye model.

In the present case, this model is built with thick lenses: this implies certain considerations regarding the concept of « position of the IOL, » which we will detail in the next paragraph.

In a thick lens pseudophakic eye model, the thick effective lens position (ELPT) depends on the physical position of the IOL in the eye,  the corneal thickness, and the IOL geometry that varies between IOL designs and power. This is because using a thick lens pseudophakic eye, the physical distance between the cornea and the IOL (which is valid for a thin lens model) is replaced by the distance between the corneal principal image plane and the IOL principal object plane.  (more about the principal planes)

Using a formula for back calculating the thick IOL ELPT in each eye of a training data set, one could generate data for training purposes for a machine learning algorithm or regression calculus. In addition to a well-documented pseudophakic eyes dataset (one must document preoperative biometry data, postoperative refraction, power, and IOL model), we also need a formula that allows back-calculation of the physical IOL’s position from these elements. This algorithm would then aim to predict the ILP  of eyes operated on for cataracts from their preoperative ocular biometry data, allowing the suitable IOL power to be chosen for the desired refraction using a paraxial optical formula ray tracing, or IA algorithm.

Within the IOL power calculation framework, we seek to develop a function predicting the value of the ILP for a given eye before cataract surgery. Once the value of the ILP is predicted from this function, we can predict the theoretical position of the principal object plane of the IOL that we plan to insert. In this case, it is assumed that the anterior surface of this IOL does not depend on its power and will be located at the ILP distance from the posterior surface of the cornea.

It is then possible to calculate the power of the IOL, which, positioned in this way, will make it possible to obtain the desired postoperative refraction. One can do this analytically by solving an equation of which the unknown is the IOL’s power or by performing an iterative calculation, i.e., by « trying » several powers of IOL up to achieve the desired target refraction. The assumption made here is whatever the power applied and IOL model, the anterior surface of the IOL would be positioned identically (at the same ILP): we can, of course, make a slightly different assumption that takes into account the thickness of the implant and thus back-calculate the position of the median plane of the IOL to insert.

Whatever method is used to determine the physical position of the implant to the posterior surface of the cornea, it is first necessary to back-calculate the value of the ELPT using a thick lens paraxial model and it is on this point that we will focus our efforts.

The schematic eye is represented as an optical system combining the cornea and the IOL, with each ‘lens’ being defined by its anterior and posterior radius of curvature, its refractive index, and its thickness.

The design of the IOL (its anterior and posterior radii) can vary for the same paraxial power depending on the Coddington shape factor. Once obtained, the value of the ELPT can be used to compute the anatomical lens position (ALP), which corresponds to the distance separating the anterior corneal and IOL vertices.

The internal lens position (ILP) equals the ALP minus the central corneal thickness. 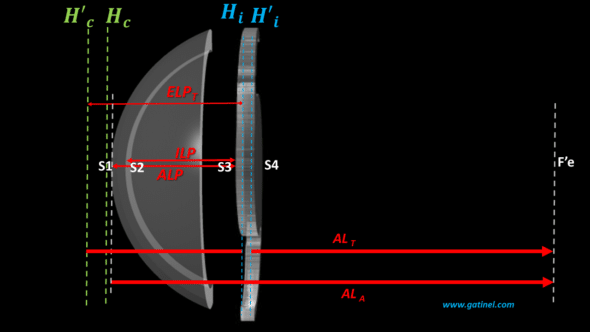 Using the properties of such a thick lens paraxial eye model, we determined the following formula:

One can solve the preceding equation for ELPT :

This equation looks complicated, but it can be easily programmed in a spreadsheet. It provides the value of the ELPT in an emmetropic pseudophakic eye.

The ELPT value can be computed for a non-emmetropic pseudophakic eye after replacing Dc by Dce in the preceding equation,  where Dce is the sum of Dc and the vergence in the corneal plane of a spectacle lens of power equal to SE placed at distance d from the corneal vertex (neglecting the distance S1Hc).

This amounts to giving the cornea emmetropizing power so that one can use the ELPT resolution equation.

NB: The ELPT resolution equation could be used to determine the effective thin lens position, denoted ELPt, obtained in a thin lens model where the cornea and IOL have a null thickness (S1S2=S3S4=0) and  ALA=ALT. Conversely, when we use this formula in a thick lens context, ELPT corresponds to a distance between principal planes, which depends not only on the anatomical position of the IOL to the cornea but also on the geometry of the IOL (ratio between the anterior and posterior curvatures, central thickness).

As we know the characteristics of the cornea thanks to the preoperative biometry, as well as those of the inserted IOL, we can calculate the value of these segments to obtain the ALP.

Finally, the internal lens position (ILP: distance between the vertex of the corneal posterior surface and the  anterior surface of the IOL) is given by:

where dc is the central corneal thickness (S1S2).

Computation of the  ELPT, ALP, and ILP

The following spreadsheet is used to calculate the effective position-related variables of the thick IOL in a pseudophakic eye from biometric data, postoperative refraction, and IOL geometry (Coddigton shape factor). Rca and Rcp are the anterior and posterior corneal surface radii, respectively. di is the IOL central thickness. Ria and Rip are the anterior and posterior IOL surface radii, respectively, computed from the IOL power and Coddigton values.

We have published a paper focused on the ELP back calculation.

This data-inferred approximation of the physical position of the IOL in the eye could increase IOL calculation accuracy. As demonstrated concretely with this spreadsheet, the  ILP can be calculated for well-documented eyes comprising a training set and then used as the designated target to predict using an algorithm (or regression task), with the preoperative biometric +/- demographic (age, sex, etc.) parameters as features. 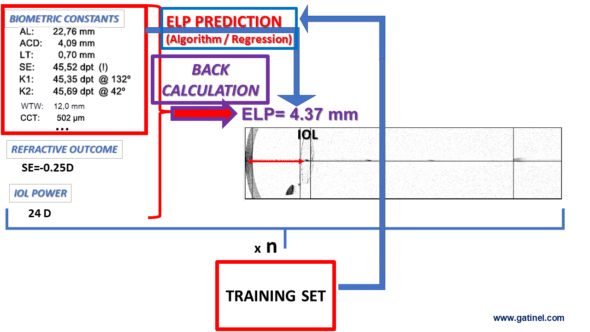