12. Refraction of the pseudophakic eye

This page is devoted to calculating the theoretical refraction in the spectacle plane of a pseudophakic eye when we know the IOL  effective position (ELP) and its optical power and the main ocular biometric parameters (anatomical axial length, total corneal power). This allows, particularly, to study the theoretical impact on ocular refraction of biometric variables and those related to the implant (power, design, and effective position). An interactive spreadsheet allows you to play with these parameters at the end of this page.

The refraction of the pseudophakic eye is equal to the power of the corrective lens, which allows the light emitted by a distant point source to be focused in the retinal plane after passing through the spectacle lens and the ocular media. 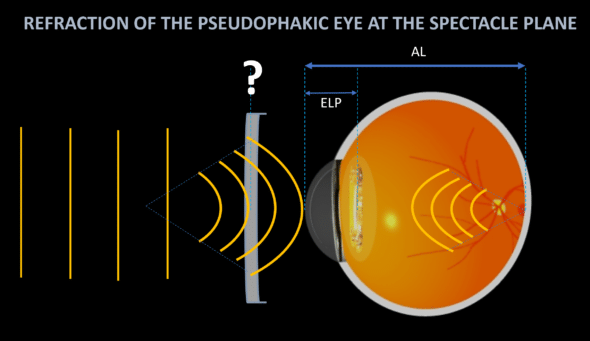 A page is dedicated to elaborating an IOL power calculation formula intended to induce the refraction R (R=0 when targeting emmetropia) in the air (n0=1) for an eye of known axial length and total corneal power.

In the present case, it is a question of predicting the refraction of an eye of which we know the biometric dimensions, the power, and the effective position of the  IOL.

We will use a simple method, which calculates the total theoretical corneal power allowing to induce emmetropia. The eye’s refraction is then computed as the difference between this value and the measured corneal power.

One can apply it to an eye model based on thin-lens equations (which ignore the optical effects of lens thicknesses and shape factors) or a specific thick-lens eye model.

We will also present another method, based on the use of the vergence formula.

Calculation of the emmetropizing corneal power

We have established a formula to relate the main biometric dimensions of the emmetropic pseudophakic eye using thick lenses paraxial modeling:

Using the formula above, we can calculate ALT, i.e., the distance separating the principal image plane of the cornea and the theoretical image focus (F’e) of the couple cornea + IOL.

From the value of the ALT and the parameters that describe the curvatures of the anterior and posterior surfaces of the cornea and the IOL, the distances between them, and their respective refractive indices, we can obtain the value of the anatomical length axial  ALA  (the calculations are detailed on this page). This provides the value corresponding to the axial length making that pseudophakic eye emmetropic. If this distance is shorter than the measured axial length, then the eye is myopic. If it is longer, the eye is hyperopic. And, of course, if it coincides with ALA, the eye is emmetropic!

Rather than comparing these distances, it is more convenient to calculate the value of the total corneal power of the eye considered, which would give it emmetropia. If this value is equal to that of the measured corneal power, then the eye is emmetropic. If it is lower, the eye is myopic, and if it is higher, the eye is hyperopic.

Solving the above equation for Dc provides the expected total corneal power Dce for which the considered eye is emmetropic when an IOL of power Di is positioned so that its object principal plane Hi is located at distance ELPT from the image principal plane H’c of the cornea: 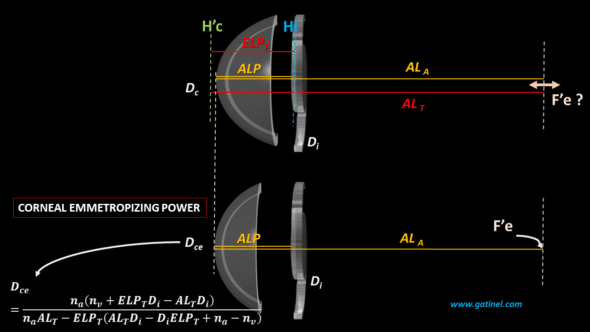 Refraction of the pseudophakic eye in the spectacle plane

The refraction (spherical equivalent, SE) in the spectacle plane of a given pseudophakic eye is a function of the difference between Dc and Dce in the corneal plane:

where d is the distance to the spectacle plane (12 to 15 mm in most cases).

When Dce < Dc, this means that the measured power of the studied eye is too high, and consequently, this eye is myopic (SE <0). 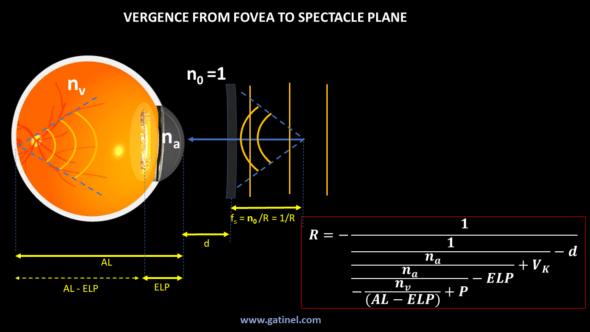 We will not detail all the stages of the calculation as we did on the page dedicated to the calculation of the IOL power. The informed reader will be able to exercise his talents by finding this explicit formula by calculating iteratively using the vergence formula, from the following diagram.
The purpose of the calculation is to determine the refraction R (in diopter) of a pseudophakic eye of corneal power Vk having received an IOL of power P, that is to say, the vergence of a spectacle lens placed at the distance d and of opposite vergence the vergence propagated from the fovea through ocular mediums to d. As the form of the equation suggests, we apply the vergence formula to each interface, and the calculated vergence allows us to determine the distance to the next real or virtual focus (by dividing the refractive index of the medium by this vergence). The vergence exiting the eye is centered on the uncorrected eye’s punctum remotum (PR) which coincides with the spectacle lens image foci to conjugate incoming parallel rays ( » infinite distance ») with the fovea.

Computing the refraction of the pseudophakic eye

The following spreadsheet makes it possible to calculate the theoretical spherical equivalent of a pseudophakic eye.

As you will see using this spreadsheet, an isolated variation of the Coddington factor is likely to vary the power of the IOL required to reach the refractive target. We have published a paper focused on this issue.

This strongly suggests that disclosure of IOL radius of curvatures, thicknesses, and refractive indices by IOL manufacturers could be beneficial, especially when dealing with asymmetrical IOLs, both for the development and prediction phases.