Here we present a synopsis of our study, where machine learning using wavefront data processed with a new polynomial decomposition basis is leading to accurate and precise prediction of spectacle correction. 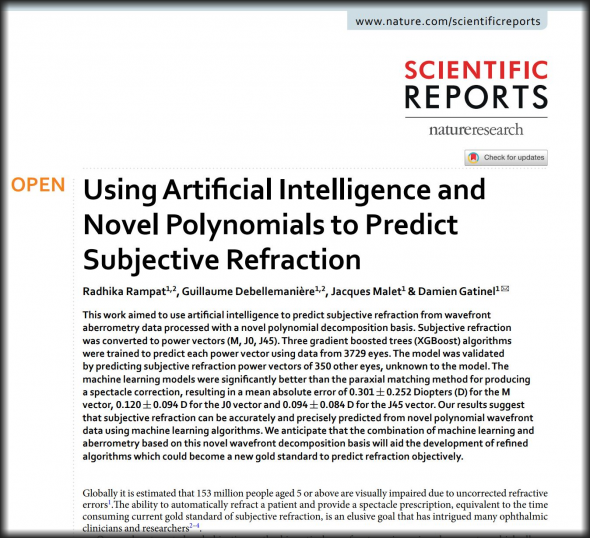 Optical wavefront sensing using aberrometry is an objective method that allows mathematical reconstruction and analysis of lower and higher-order (degree) monochromatic aberrations of the eye. We believe that this objective method had the potential to be the new standard for optimizing the correction of refractive errors by converting aberrometry data to accurate sphero-cylindrical refractions.

The output of a typical wavefront analysis is a list of coefficients, each weighing a specific aberration mode. It is expected that the taxonomy of the higher-order aberrations is clinically relevant and equipped with interesting mathematical properties.

When a wavefront decomposition is performed, each mode is given a coefficient value. The higher the value of the coefficient, the higher the « weight » or effect of the considered mode on the total wavefront error. Wavefront reconstruction over a circular pupil can be achieved by adding some Zernike modes, each weighted by a coefficient whose value is specific to the wavefront of interest.

Various metrics can be derived from the wavefront coefficients analysis:

– The low degree component of the wavefront should correspond to or be highly correlated with the spectacle correction of the measured eye.

– The higher degree component should predict the residual optical defects that persist after correcting that eye with the best spectacles’ correction.

Machine learning is already in use in Ophthalmology for image analysis in medical retina and glaucoma as well as regression tasks, notably in IOL calculations.

Our aim was to build and evaluate a set of predictive machine learning models to accurately and precisely objectively refract a patient using wavefront aberrometry with a new aberration decomposition and to evaluate the relative importance of each aberration in the prediction process for each vector.

The accurate distinction between lower and higher wavefront components is mandatory to accurately predict spectacle refraction (as well as accurate retinal image metrics, which was not investigated in this study).

However, Zernike polynomials have one major drawback for describing the ocular wavefront in an ophthalmic context: these polynomials do not accurately distinguish between Lower and Higher Order Aberrations. Lower order terms are present within the expression of some Higher Order coefficients so we can’t accurately predict sphero-cylindrical refraction or accurately define the effects Higher-Order Aberrations on the retinal image viewed. 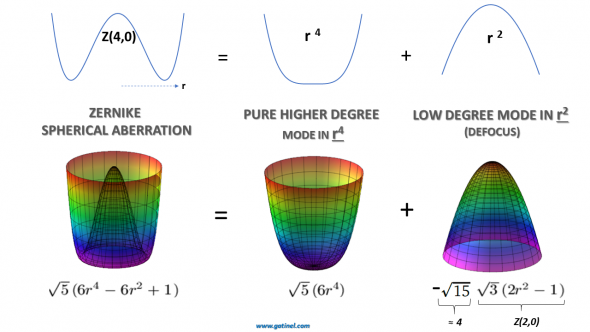 The Zernike spherical aberration mode contains not only a high degree term in r^4 but a low degree term in r^2 which is equivalent to defocus. Each micron of Zernike spherical aberration Z40 contains nearly 4 microns of defocus of opposite sign. If an ocular wavefront is exclusively a r ^4 phase aberration, its reconstruction in Zernike polynomials should automatically include an artifactual defocus component (low degree) to compensate for the defocus necessarily introduced by the Zernike Z(4,0) mode. This mixture does not allow us to simply predict the subjective refraction and study the specific influence of the high degree term in r^4 from a Zernike expansion. 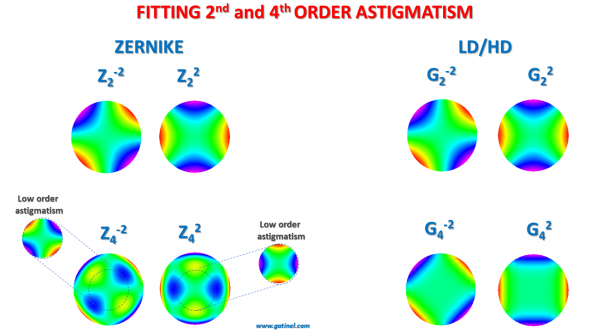 We have developed a solution to these problems based on new polynomial functions to better distinguish between low degree (LD) and high degree (HD) aberrations: the LD/HD modes expansion. The core of this work has recently been published in the Journal of Optical Society of America (JOSA A), and some relevant clinical examples in the Journal of Refractive Surgery.

We have created new orthogonal and Normalized modes G(n,m) to replace the high order Zernike « impure » modes. Their analytical expression no longer contains low order terms (2 or less), and their central portion is flat. 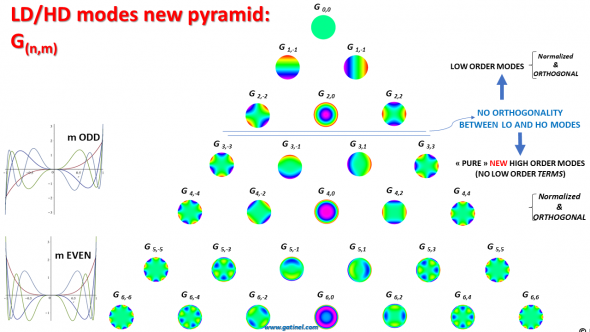 The LD/HD aberration classification proposes a clear cut between low and high-order (degree) aberrations. The higher-degree modes are “paraxially flat” ( cross-sections, left). There is no orthogonality between the LD and HD spaces.
However, orthogonality is maintained between the modes comprised within the low degree and the high degree space. The rupture of orthogonality echoes the clinical approach, which «decouples » the low (spectacle-corrected) and high-order aberrations. It is possible to calculate RMS coefficients of grouped modes within the low and within the high-degree modes. The total RMS cannot be calculated directly from the low degree RMS and high degree RMS values using Pythagorean calculations.

A wavefront error can be decomposed in the LD/HD classification as a sum of weighted G(n,m) modes. The g(n,m) coefficients can be directly computed from the Zernike coefficients z(n,m) without the need for a new wavefront acquisition.

The low order modes G(2,0), G(2-2), and G(2,2) are orthogonal and their respective coefficients can be easily converted in the 3D dioptric vector space components of the refraction M, J0, and J45. 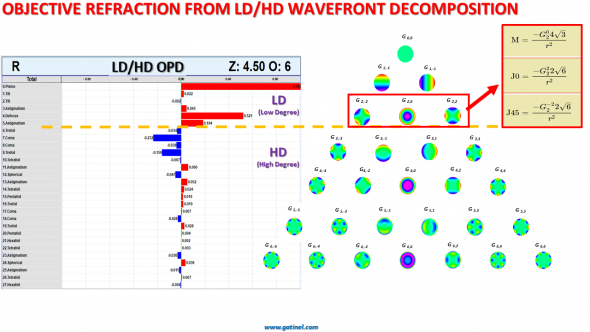 In the LD/HD decomposition, no low degree term is present in the high degree modes. All the terms corresponding to 2nd degree spherical and cylindrical defocus are gathered in the low degree component (LD). The low order coefficients of the 2nd radial degree mode of the LD/HD classification can be converted in the vector components of the refraction (r is the radius of the pupil). This comprehensive 2nd degree component is equivalent to an osculating quadric to the wavefront and can serve to compute an objective “paraxial refraction”. However, this objective refraction, although close to the subjective refraction, often differs slightly from this one on an individual basis.

The remaining high degree component is devoid of low degree terms e.g. defocus and 2nd-degree astigmatism. This allows unequivocal analysis of the influence of the high-order aberrations on the subjective spectacle low order correction.

A total of 2890 electronic medical records of patients (6397 eyes) evaluated for refractive surgery at the Laser Vision Institute Noémie de Rothschild (Foundation Adolphe de Rothschild Hospital, Paris) were retrieved and analyzed. For each eye, the following data was available:

– Non-cycloplegic subjective refractions: Each refraction in Sphere S, Cylinder C, and axis A format was transformed into 3D dioptric vector space (M, J0, J45) where the three components are orthogonal.

A machine learning approach using LD/HD polynomials was developed for predicting the results of conventional, sphero-cylindrical refraction from wavefront aberrations. 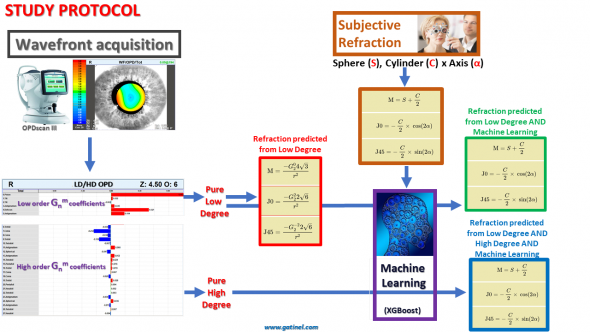 XGBoost is an implementation of gradient boosted trees focused on performance and computer efficiency. It can perform both regression and classification tasks. It was chosen because of its recognized performances and its resistance to overfitting.

Feature importance analysis was achieved via the calculation of SHAP (SHapley Additive exPlanations) values for each model in order to determine the most influential polynomials.

Read this paper to learn how the best precision and accuracy were obtained, when all the novel polynomials coefficients were used as predictors, demonstrating the significant influence higher-order aberrations have on spectacle correction.

I wish to thank the co-authors who have contributed to this work: Guillaume Debellemanière (MD), Radhika Rampat (MD), and my Ph.D. directors: Laurent Dumas (Ph.D.), and Jacques Malet (Ph.D.).

I also wish to thank the Nidek company and its R&D team for implementing this new method in a beta-software, now able to process wavefront data obtained with our OPD-Scan III wavefront sensor.

More pages on this website about wavefront sensing and analysis: