Often used in the form of sophisticated weapons such as guns or light sabers in many science fiction films, laser radiation is today used daily for more civilian purposes. Laser technology is now in everyone’s hands: it is enough to press the button of a laser pointer to emit this particular light. Laser radiations are nowadays indispensable as effective for medicine, especially in ophthalmology. The transparency of the visible ocular media provides a particularly favorable medium for the propagation of laser light.

The possibility of emitting a very monochromatic and coherent light, and therefore particularly energetic, is at first the fruit of a theoretical prediction (Einstein, 1916). The first laser radiation emerged from a California experimental physics laboratory in the early 1960s (Mainman, 1960). If all the radiations that can be called « laser » (an acronym for « light amplification by stimulated emission of radiation ») have common properties, there are actually several laser families.

– the femtosecond laser: ultra-short infrared radiation which allows precise and non-thermal cuts to be made within the corneal tissue itself,

– the excimer laser: it delivers pulses of ultraviolet light, which make it possible to sculpt the corneal surface.

Despite the relative trivialization of the use of these lasers in refractive surgery, they possess certain distinctive characteristics that involve a very particular rescaling of our time and space familiar units. Their astounding character does not fall within the domain of science fiction, and deserves to be reported here.

Power is a physical property that corresponds to the amount of energy supplied to a system per unit of time. The disruptive effect of the light emitted by the femtosecond laser on the corneal tissue results mainly from the extraordinary brevity of this interaction. This provides the laser light trains with sufficient power to separate the electrons from atomic nuclei, thereby breaking the corneal tissue at the focal point. The energy of an impact is of the order of a microjoule (10^-6 joule). A microjoule is the equivalent of one millionth of the energy required to lift an object of 100g (like an apple) over a height of one meter to the surface of the earth.

The duration of a femtosecond is so infinitesimal that it escapes our senses. This would also apply at the other extremity of the time scale, when extremely long time periods are used to depict astronomical durations. The Earth, which is 4.6 billion years old, hosted dinosaurs for 175 million years. Compared to the duration of a human life or civilization, these are immeasurable time periods. A change of scale can be useful to better imagine this extreme times. The cosmic calendar of the astronomer Carl Sagan thus constitutes an attempt to bring to a more human scale the main stages that mark the history of the universe, from the Big Bang (roughly 14 billion years ago) to the present day. In this experience of thought, it is enough to contract the entire history of the Universe in a calendar year. The birth of the Universe occurs at the first second of the first of January of the year, and the present time corresponds exactly to midnight on December 31st. In calendar, the Earth forms towards the 14th of September, and the primitive life is born there a dozen days later. Dinosaurs appear on December the 25th, and disappear on December the 30th. It is not until December 31 at 11:52 pm than anatomically modern humans appear, while some of their descendants will witness the birth of Jesus Christ at 11:59:55 pm.

In order to better represent the flow of time at the scale of a femtosecond, a similar reasoning may be carried out, but this time by expanding  the duration of one second until it becomes equal to the estimated age of the Universe (about 14 billion years). At this scale, the duration of a femtosecond stretches to be equal to 10^-15 x 14 x 10^9 x 65 x 24 x 60 x 60 = 442 seconds, that is less than 8 minutes… Thus, there are seven times more femtoseconds in a second, than the number of hours that elapsed since the Big-bang.

The total duration of light trains emitted by femtosecond lasers used in corneal surgery is equal to a few hundred of femtoseconds. In our new scale, where the second is stretched to equal the age of the universe, a laser shot emitted during 400 femtosecond would then correspond to a duration of 2 days (49 h more precisely)

To perform the cutting of a LASIK flap, the 400 femtosecond long laser impacts must be focused to a controlled depth from the surface of the cornea. Impacts are distributed so that they are juxtaposed to form a dotted line, with a typical spot spacing of 8 microns. Each impact creates a cavitation bubble with a diameter of a few microns.

The Alcon Wavelight FS200 is the fastest femtosecond laser, with the fastest firing frequency (number of shots per unit of time): in one second, this laser emits 200,000 spots (its frequency is equal to 200 KHz). If the duration of one second is stretched again to equal the estimated age of the Universe (14 billion years), the FS200 femtosecond laser would become, on this scale, an instrument that emits continuous radiation for two consecutive days, …before stopping for several millennia. The free interval between two shots at the frequency of 200,000 per 14 billion years would indeed be … 70,000 years ! 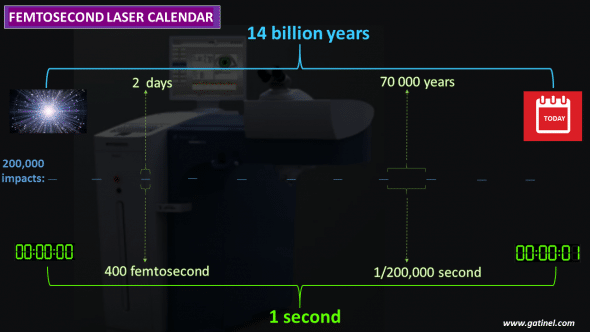 At a human scale, a frequency of 200,000 shots per second may be a furious pace. However, our previous thought experiment reveals that, in view of the infinitesimal duration of emission of the femtosecond laser, the time separating the emission of two consecutive femtosecond impacts still appears immeasurably long.

Another concrete way to explore the brevity of the femtosecond impacts is to consider the distance traveled by the light emitted for a duration of 400 femtosecond. The velocity of light propagation in the vacuum is 299 792 458 m/s. With this celerity, it would take a second to a beam of laser light to join the earth and the moon, or to travel seven and a half times around the globe. However, in comparison, during 400 femtoseconds, the light has time to cover only 0.12 millimeter (120 microns)! This is about the thickness of a human hair. 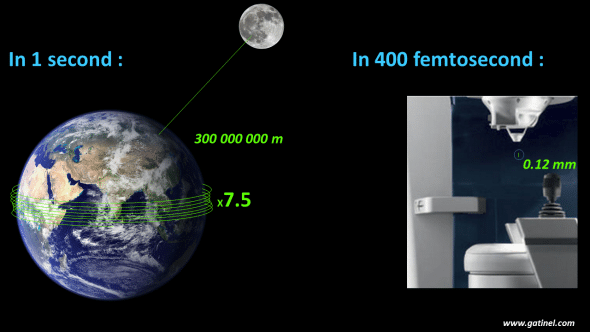 The radiation emitted by an excimer laser is in many respects different from that of the femtosecond laser. It is located in the short ultraviolet region of the light spectrum: the wavelength emitted by the excimer laser is 193 nm. The EX500 laser (Alcon / Wavelight) delivers impacts whose duration is close to 10 nanoseconds at a frequency of 500 shots per second (500 Hz). This frequency is equivalent to that of the B4 pitch (or slightly lower than the C4 key, at the middle of the piano keyboard). This monotonous vibration is actually perceptible acoustically by a surgeon who would have ear for music when the EX500 excimer laser emits it’s shots.

One nanosecond corresponds to 10^-9 seconds, i.e one billionth of a second. This duration, which is always extremely brief on the scale of our perception of time, nevertheless is a million times longer than that of a femtosecond (10^-15 seconds). By way of comparison, again the rescaling which expands the second to the duration of the age of the Universe, the excimer laser EX500 becomes an instrument that would deliver impacts of a duration of 140 years… every 28 million years.

The ablation depth produced by a laser pulse is generally of the order of a half micron: this dimension is that of the wavelengths located in the middle of the visible light spectrum. The precision of this sculpture is equivalent to the lightwave dimensions: it makes the laser excimer the most precise surgical instrument ever developed, and echoes the unsurpassed quality of the remodeling that this technology allows.