Repeatability of keratometry measurements obtained with 3 topographers in keratoconic and normal corneas.

From the Department of Anterior and Refractive Surgery Dept, Rothschild Foundation, Paris, France

Summary of this paper:

The main finding of this study is that repeatability of maximum and minimum keratometry readings is generally lower in keratoconic corneas than in normal corneas with the devices studied. Since the topographies performed in keratoconic eyes are less repeatable than those performed in normal eyes, the threshold values of keratometric changes used to ascertain keratoconus progression should be carefully considered. Caution should be taken when interpreting the topographies of kératoconus patients: the higher variability should be taken into account before performing any treatment. 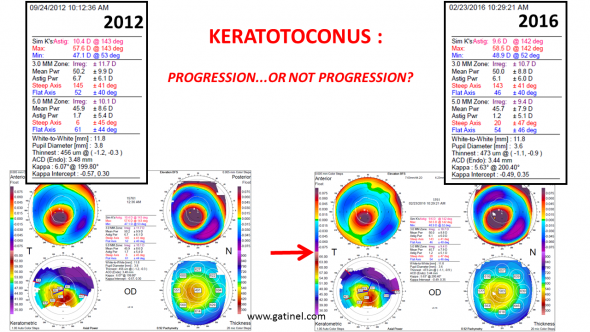 Keratoconus is a non-inflammatory progressive localized thinning and protrusion of the cornea, leading to irregular astigmatism and impairment in visual function. Corneal topography has revolutionized the diagnosis and follow up of this disease, making it possible to make accurate measurements of keratometry and corneal thickness at each point of the corneal surface.

When measured repeatedly in the same eye, a topographic variable is not constant, but tend to show a roughly normal distribution around the variable’s mean. This is not the consequence of some physiologic fluctuations, such as encountered in blood pressure monitoring which can vary within minutes, but instrument related issues. However, when coming to routine follow-up examinations after diagnosis, the judgment of topographic criteria such as the Kmax or simK are usually based on a single measurement, and the measurement fluctuations will not be taken into account – until the extent of the criteria variation has been studied.

Clinical and topographical measures assessed in subjects with keratoconus have demonstrated poorer test–retest variability: topography-derived indices are less repeatable in keratoconus eyes than in normal eyes.

Let us consider a group of patients with keratoconus, including some eyes whose measured indices values were by chance, at the first examination, lower than their actual mean (which would have been calculated from several consecutive repeated measurements). On average, their follow-up values will necessarily tend to increase (regression to the mean). For these eyes, this could be misinterpreted as a progression of the disease.

Misinterpretation can be avoided by repeated examinations to establish an adequate threshold value beyond which there may be statistically significant progression (or improvement), for both keratoconus eyes, and eyes from a control group. Repeatability is the closeness of agreement between the results of successive measurements of an identical test material performed under defined conditions. The conditions under which these measurements were performed are known as the repeatability conditions. These conditions include the same operator, same apparatus, and a short time between analyses.

The repeatability of measurements of continuous numerical variables can be summarized by the standard deviation of replicate measurements, called the repeatability standard deviation. This value is useful in determining a repeatability limit; a value less than or equal to the absolute difference between 2 test results obtained under repeatability conditions can be expected to lie within a probability of 95%. Said differently, it the absolute difference between the values of a topographic criteria obtained with two different exams is less than the repeatability limit, there is 95% probability that this difference is due to a random error (test-retest variability), and does not reflect a true increase or decrease of the studied criteria.

Collagen cross-linking is considered to be the only therapeutic procedure capable of slowing or halting the natural history of keratoconus and is indicated in case of progressive keratoconus. In this context, the definition used to define the progression of keratoconus becomes quite important. In most studies, an increase of the steepest keratometry of 1 diopter or more (or an increase in the mean keratometry of 0.75 diopter or more) is considered as a sign of progression of the ectatic disease. These admitted thresholds must be confronted to the repeatability of the corneal topography instruments used to diagnose and monitor keratoconus progression.

The goal of this study was to assess the repeatability of the corneal topography functions of Orbscan II, OPD-Scan III, and iTrace in keratoconus eyes and in a control group of normal patients. The measurements were performed with a combined Placido-scanning slit system (Orbscan II) and two combined Placido-aberrometer systems (OPD-Scan III and iTrace).

59 keratoconic eyes of 34 patients and 54 normal eyes of 27 subjects were included. Three groups were constituted: stage I-IV keratoconus eyes (59 eyes), stage I-II keratoconus eyes (41 eyes) and normal eyes (54 eyes). Three successive measurements were performed with each device in random order. If an examination was considered unsatisfactory because of excessive eye movement or eyelid blinking, it was performed again.

In our series, the repeatability limit was lower (and therefore the repeatability was better) in the control group than in the two keratoconus eyes groups for almost all studied parameters and with the 3 devices tested. This demonstrates the need to take more precaution with the results provided by these topographers in patients with keratoconus because their readings are less repeatable.

This shows that an increase of the steepest keratometry of 0.75 D or even 1 D is probably not enough to assert that keratoconus is actually progressive, especially with Orbscan II.

What are the reasons of the lower repeatability observed in keratoconic eyes? Ectatic corneas have a less regular and more complex shape, which makes them more difficult to analyze by topographers. Furthermore, keratoconic patients have more difficulties to fixate at a target because of blurred vision, which can result in a slight offset of the topography. Spreading of tears between each blink is probably less uniform in patients with keratoconus compared to patients with normal corneas. This may in part explain the lower repeatability of topographic measurements in ectatic corneas.

Ignoring this variability of topography in keratoconic corneas could lead to improperly indicate and treat with collagen cross-linking some eyes with otherwise stable keratoconus disease. Similarly, it could lead to the wrongful interpretation that this treatment was effective in stabilizing a cornea, while the keratoconus disease was actually stable before performing the cross-linking.

In conclusion, our results show that topographies performed in keratoconic eyes are less reliable than those performed in normal eyes and this difference, also mild in stage I-II keratoconus, increase with the grade of the keratoconus. This suggest that the threshold values of keratometric changes used to ascertain keratoconus progression should be carefully considered, depending on the device on which they were performed.  In the meantime, caution should be taken when interpreting the topographies of such patients, and their higher variability should be taken into account before deciding to perform any treatment such as collagen cross-linking.