Objective assessments to quantify crystalline lens density are becoming indispensable for modern cataract surgeons, in particular when assessing early to moderate-stage cataracts, in which case clinical assessment might be less reliable, as well as when documenting cataract progression. Objective measurements are especially relevant given the recent focus on early lenticular changes, which can be visually significant for patients despite an unremarkable clinical examination and visual acuity test results.

Our results show that SS-OCT (IOLMaster 700) measurement of the ALD using an upgraded algorithm to perform automatized global 3-D analysis of the lens is a reliable, repeatable technique for grading cataract, with improved sensitivity and specificity compared with the technique described in our pilot study. We also found that the ALD correlates well with previously validated objective methods, such as OSI and PNS measurements. 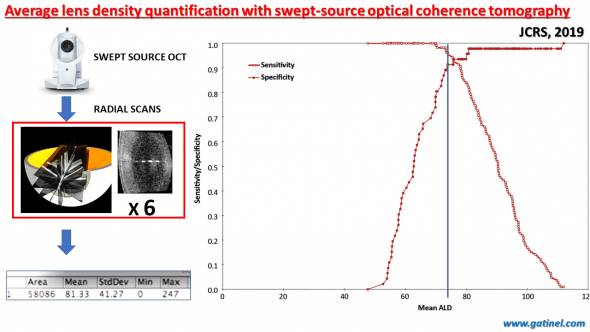 Average lens density (ALD) quantification with swept-source optical coherence tomography (SS-OCT):  Six radial B-scans including the lens were acquired 3 times at each meridian (0, 30, 60, 90, 120, and 150 degrees). An algorithm measured the density of the region of interest on a scale of 0 to 255 pixel intensity units. SS-OCT ALD measurement of 73.8 pixel units or greater strongly suggested the presence of cataract, with a sensitivity of 96.2% and a specificity of 91.3%.